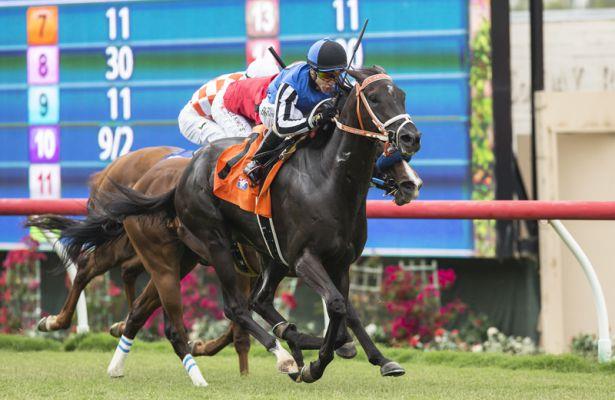 Restrainedvengence, an 11-1 longshot ridden by Evin Roman, forged to the lead in the final strides to win the featured $100,000 Oceanside Stakes for 3-year-olds on opening-day of the 2018 summer Thoroughbred racing season at Del Mar.

Always well-placed in the one-mile contest over the infield Jimmy Durante Turf Course, Restrainedvengence was swung to the outside for the stretch drive by Roman and responded generously to overhaul another 11-1 outsider, Afleet Ascent, and win by three-quarters of a length in 1:35.37 for the distance.

"I’m lucky I got the opportunity to ride this horse," said Roman. "I appreciate it. He was in a good spot; all the way. Then he finished strong. He felt good at the finish; like he could run farther.”

Calexman, who set the early pace, was third, a half-length behind the runner-up and the same margin in front of fourth-place Desert Stone in the field of 14 runners. Texas Wedge, the 5-2 favorite in a wide-open betting contest, was seventh. Withdrawn from the race were Soltero and Risky Proposition.

Restrainedvengence, trained by Val Brinkerhoff and owned by Kelly Brinkerhoff and Bobby Grayson, Jr., is a Kentucky-bred son of Hold Me Back. The victory was his third in eight starts and first money of $60,000 increased the gelding’s earnings to $143,670.

“It’s very uplifting because my partner Bob Grayson had two kinds of cancer, he’s been taking chemotherapy all winter and I think this horse saved his life," said winning trainer Brinkerhoff. "We knew this horse had some talent. This is the race we’ve been looking forward to all year and we got it.”

Trainers Doug O’Neill and Jerry Hollendorfer dominated the program through the first seven races. O’Neill, a three-time leading conditioner at Del Mar who holds the record most wins in a day, five, at the seaside track,  won four races – the first, second, fourth and fifth, while Hollendorfer-trained horses accounted for the third, sixth and seventh.