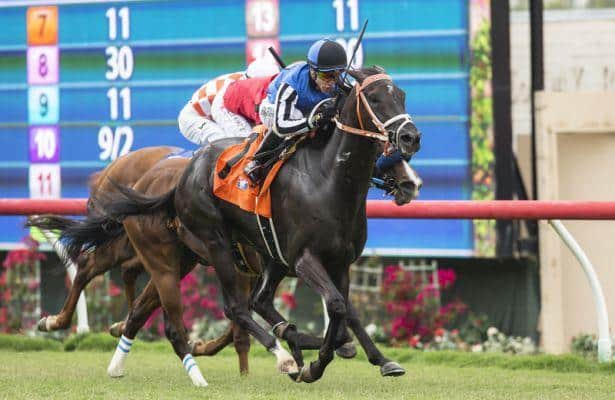 Restrainedvengence, the sometimes-irascible cash cow for trainer Val Brinkerhoff and his owners, Bobby Grayson Jr. and Val’s wife, Kelly, will face the most daunting test of his long career when he runs in the Breeders’ Cup Dirt Mile at Del Mar on Nov. 6.

“The Mile (on turf) is too tough with the likes of Mo Forza, and the Dirt Mile is coming up light, so that’s where we’re going,” said Brinkerhoff, who has had Restrainedvengence since day one, running the six-year-old gelded son of Hold Me Back on turf, dirt, synthetic, in sprints and routes from coast to coast.

In 34 career starts, Restrainedvengence has 10 wins, four seconds and three thirds with earnings of $917,682. He worked four furlongs Friday in 50 seconds flat.

“It was an easy breeze,” said Brinkerhoff, who celebrates his 65th birthday next Tuesday, Oct. 19. “He’ll have one more here before we go to Del Mar.”

Edwin Maldonado, who piloted Restrainedvengence to a courageous nose victory as the 13-10 favorite in the $200,000 Downs at Albuquerque Handicap on Sept. 18, will be back aboard in the Dirt Mile. Restrainedvengence won the same race last year by a head under Ruben Fuentes.

Restrainedvengence is a cut below racing’s A-List Thoroughbreds, but on the track he is all race horse. Anyone who doubts that should watch a replay of his victory in New Mexico.

Winning the Breeders’ Cup would be a fitting fairytale finale.

“The Breeders’ Cup is a big step,” Brinkerhoff allowed, “but we might not get another chance.”