Restoring Hope jockey Geroux: 'I was trying to win’ Belmont 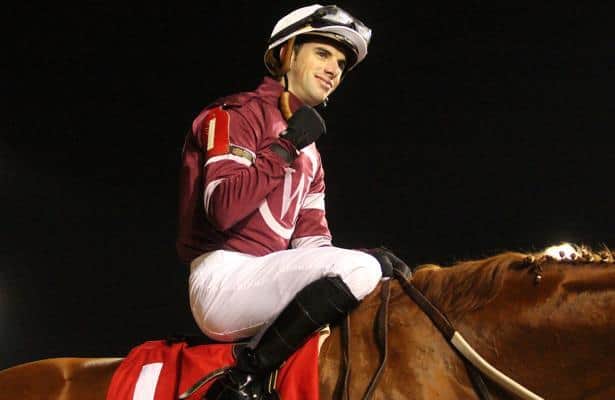 Jockey Florent Geroux confirmed Thursday on the Switching Leads radio show that he had spoken earlier in the day with the New York Racing Association about his ride aboard Restoring Hope in the Belmont Stakes.

Of course, the tactics used by Geroux have been a hot button issue since Restoring Hope ran wide into the clubhouse turn, then closed back in near Triple Crown winner Justify before fading to an off-the-board finish.

Geroux wanted to make one thing clear: “I was trying to win the race, or at least trying to get a piece of it.”

He added: “I thought I was giving my horse every chance.”

Haskin questioned Geroux about the race’s opening moments, with the rider saying there was no conspiracy to help Justify to an easier trip in the third leg of the Triple Crown series.

“Bob asked me to put the horse forwardly placed,” he said of trainer Bob Baffert, who also conditions Justify.

Geroux admitted that “I probably could have done a little bit better job of steering him” as Restoring Hope crossed over another would-be front-runner, Noble Indy, before running outward into the turn.

After Justify went the opening quarter mile in 23.37 seconds, then relaxed to a 48.11-second half with Restoring Hope flanking him, Geroux said, “I think a lot of guys in the race would love to have my spot. Nobody took it.”

Restoring Hope faded through the far turn and went on to run eighth of 10. Had his horse finished up well, Geroux said, he'd be praised rather than chastised for actions in the early going.

Also on Saturday's card at Belmont Park, Geroux rode Monomoy Girl to a victory in the Grade 1 Acorn. In recent years, he also rose to prominence as the regular jockey for Horse of the Year Gun Runner.

Geroux told the Switching Leads hosts that he’s seen conversations about his Belmont tactics in recent days, and that, “I don’t want people to call me a crook” or “cause suspicion” in racing.

He has a clean conscience when it comes to the issue, adding, “I have nothing to worry about.”