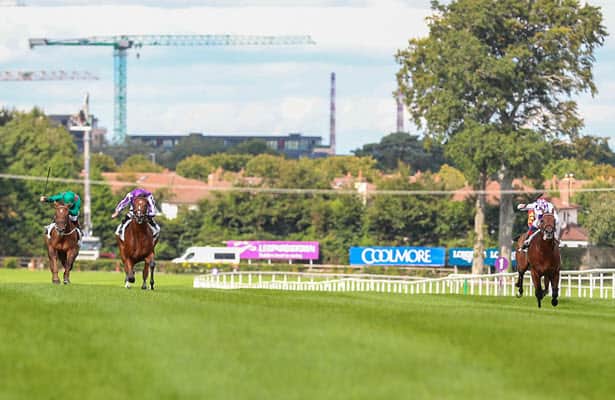 St Mark’s Basilica, who scored a win in the Irish Champion Stakes at Leopardstown, his fifth Group 1 victory in a row, has been retired to stud according to a story from the Racing Post.

Trained by Aiden O’Brien, the 3-year-old Siyouni colt had appeared in offshore futures as recently as last week at 9-2 odds for the Breeders’ Cup Turf.

"After the Irish Champion Stakes he was grand, but he was sore again when we got him back up to full work so that's why we had to pull back off him,” O’Brien said in the Racing Post story.  “I discussed it with the lads to let them know what the picture was. I ticked him over for a while and we had a chat about it."

The colt will stand for Coolmore according to the Racing Post piece, with O’Brien describing him as “as important a horses as has retired here since Galileo.”

St Mark’s Basilica had taken some time off after a training accident, recovering for the Irish Champion win, but when he returned sore in training after that race, the decision was made to retire him.

The colt was owned by Derrick Smith, Mrs. John Magnier and Michael Tabor. He was purchased for $1,667,924 at the 2019 Tattersalls October yearling sale.He finished his career with $2,603,007 in earnings.