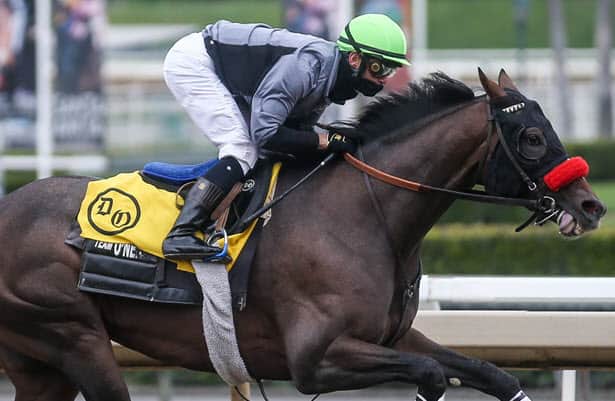 With the Aug. 21 Pacific Classic at Del Mar off the table fir Hot Rod Charlie, it does NOT open the door to the Travers. “No,” trainer @DougONeill1 said via email. “We’re going to take our time with him … no specific race in mind.”

The colt’s trainer, Doug O’Neill, had previously said he was pointing Hot Rod Charlie, who was disqualified after crossing the wire first in the Haskell (G1) on July 17, but that destination was not certain.

“We’ll only run him if he just tells us he’s ready to rock and roll,” O’Neill said in a Horse Racing Nation Barn Tour on Friday.

Co-owner Bill Strauss said after the race that the Aug. 28 Travers was unlikely for Hot Rod Charlie.

"I don’t think so," Strauss told reporters after the race. "It’s not on our path, it was never on the path. We’re going to see how he comes out, and as they say in the game, we’ll let the horse tell us where we want to go. But I don’t think we’re going to go to Saratoga next month. I think we’ll stay (at Del Mar) for a little while."