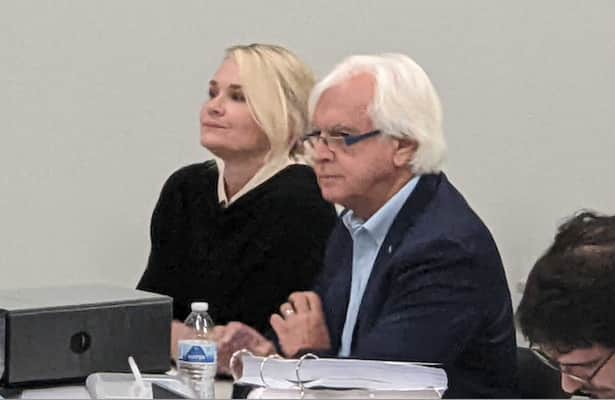 The new hearing officer in the Bob Baffert-Medina Spirit case is unlikely to re-hear the appeal by the Hall of Fame trainer.

Daily Racing Form reported that the officer, Eden Davis Stephens, asked attorneys for the connections and the Kentucky Horse Racing Commission to file briefs in the case by Dec. 22.

In reviewing the appeal, Stephens either could hold a new hearing or issue a ruling based on the transcripts produced in the most recent hearing, in August. Under both options, attorneys could file findings of fact and conclusions of law before the hearing officer makes a recommendation.

Baffert is appealing his 90-day suspension in Kentucky and the disqualification of Medina Spirit from the 2021 Kentucky Derby after a post-race finding of betamethasone.

The former hearing officer in the case, Clay Patrick, recused himself after after it was discovered that attorney Clark Brewster, who represents Medina Spirit’s owner Amr Zedan, purchased a horse co-owned by Patrick at the Keeneland September yearling sale.

After receiving the briefs, Stephens will have 30 days to make a recommendation, according to DRF. The full KHRC then can vote on whether to accept, modify or reject the recommendation.