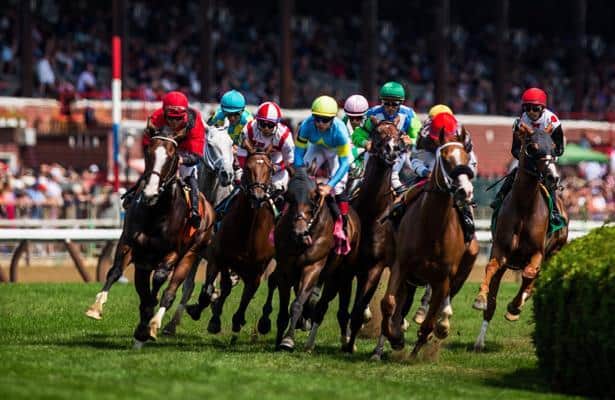 It's not something often discussed: change at historic Saratoga?

According to a morning report from Chris Onorato of NBC affiliate WNYT News Channel 13, the New York Racing Association's board of directors was to meet Thursday to consider expansion of the 2019 Saratoga meet.

By the afternoon, however, Pat McKenna, NYRA's director of communications, issued the following statement:

"Any reporting to suggest that the NYRA Board of Directors met today to discuss the 2019 Saratoga season is absolutely incorrect. While we appreciate the interest that surrounds the Saratoga racing calendar, we will formally release the dates for the 2019 season at the appropriate time. This is and has been our standard practice in notifying the public.”

Onorato's sources told him Saratoga would still run 40 days during the summer, but the potential change would stretch the dates from earlier in July through the traditional Labor Day weekend stop point by adding a second dark day to the calendar each week.

Currently, racing at Saratoga only breaks on Tuesdays.

According to multiple sources, proposed expansion of Saratoga racing season will be key topic of NYRA board meeting this AM in NYC. One source tells me meet would run 7/11-9/2 with Mondays and Tuesdays dark. Still 40 days of racing at the Spa. @WNYT

Change, of course, could make an impact on the Saratoga community, with two dark days giving reason for visitors to go elsewhere during the meet, and an additional week-plus adding to the cost of stabling there for horsemen.

Noted New York-based owner Roddy Valente was the first to hint publicly at the change this week when he sparked conversation about lack of finalized 2019 race dates.

NYRA not coming out with the 2019 calendar only proves one thing they don’t have the eight weeks finalized for Saratoga. Get ready for eight weeks at the Spa... I hope they can be smart and have Travers day be the last weekend of the meet.

According to BloodHorse, another factor to consider in calendar delays is a request for proposal to remodel Belmont Park that's due this week. Per the report, construction could for two years shift some of Belmont's fall meet dates to Aqueduct. It is not expected to affect the Belmont Stakes' traditional race date or location.

Significant changes are expected at Belmont both in and outside of racing with the New York Islander hockey team relocating there to a new 18,000-seat arena. Meanwhile, improvements to the racetrack could lead to winter racing dates at Belmont.

Analysis: Which two Euros are best in the Belmont Derby?
Five European invaders made the trip overseas for...

Locals are happy to take on big guys in 'other' derbies
We saw it at Thistledown when the gates for the Gr...