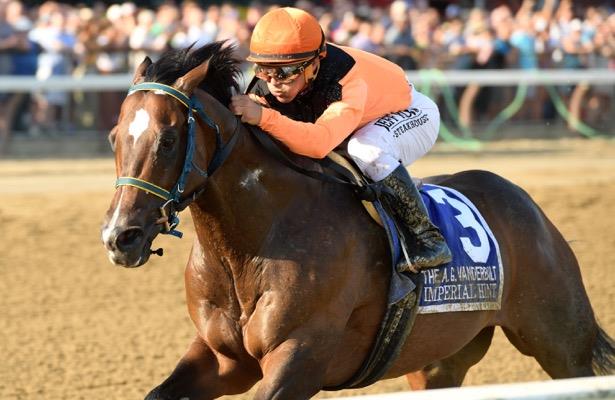 Imperial Hint, winner of four Grade 1 races, is being retired, with connections in talks for his next career at stud.

Owned by Raymond Mamone, Imperial Hint won the Alfred G. Vanderbilt Handicap (G1) at Saratoga and the Vosburgh Stakes (G1) at Belmont Park back-to-back in both 2018 and 2019.

Happy retirement to the “the Little Rocket” Imperial Hint! Cheers to a memorable career ?? pic.twitter.com/qv3OjYSGKo

"He's retiring sound but has a little bit of wear and tear," Carvajal told the DRF's Jim Dunleavy. "I think he might not be able to perform as well as last year and I don't want to run him if he's not going to be able to race at the same level."

The Florida-bred's last race was a 12th-place finish in the Saudia Cup Sprint in February. He remained in the Middle East to run in the Golden Shaheen in the Dubai World Cup, but that race was canceled because of the COVID-19 pandemic.