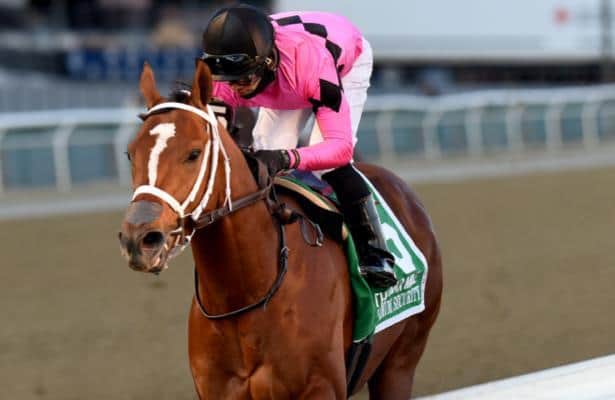 Sunday's announcement that the Pegasus World Cup (G1) will renew Jan. 25 as a $3 million race, down from $9 million a year ago, is likely to cost the event its headliner.

As a result, West is now considering the inaugural Saudi Cup, a $20 million race set for Feb. 29, as Maximum Security's next race spot that could also set him up for a try at the March 28 Dubai World Cup, which is worth $12 million.

"I wasn't thinking about the Saudi Cup, but why should I run for $3 million when I can run for $20 million four weeks later?" West told Ehalt, adding that there's "better than a 50/50 chance" the Saudi Cup is Maximum Security's destination.

The Pegasus had become a defined target after the son of New Year's Day defeated Breeders' Cup Dirt Mile winner Spun to Run and an array of older horses in a dominant, front-running showing in the recent Cigar Mile (G1).

That victory capped an eventful sophomore season for the Jason Servis trainee, who rose from a one-time claimer to capture three Grade 1 races -- and that's not including the controversial disqualification from the Kentucky Derby.

The Pegasus will no longer charge an entry fee -- it was $500,000 in 2019 -- but among other changes revealed Sunday is that all horses will be required to run medication-free. The Saudi Cup will also not allow the anti-bleeding medication Lasix.

Rumors of changes to the Pegasus structure swirled for weeks, and communications from Gulfstream Park had in recent dispatches stopped noting the races' purse structure ahead of Sunday's announcement, which fell 41 days out from the race.

"This is one of the biggest changes in a purse structure in the history of racing, and I think The Stronach Group has handled it very poorly," West told BloodHorse. "I don't think it's right at all. That said, I realize it is their track, their race, their money, and they can do anything they want, but if I were in charge, I would have been a lot more transparent and truthful to all the owners and trainers involved."

Should Maximum Security in fact defect from the prospective field, favoritism could fall to Omaha Beach, another 3-year-old who is making the 1 1/8-mile race the last of his stop-and-start career. First, Omaha Beach will prep Dec. 26 going 7/8 of a mile in Santa Anita Park's Malibu Stakes (G1).

In the meantime, Maximum Security would add to a Saudi Cup field loaded with top American interests, including McKinzie and Midnight Bisou.