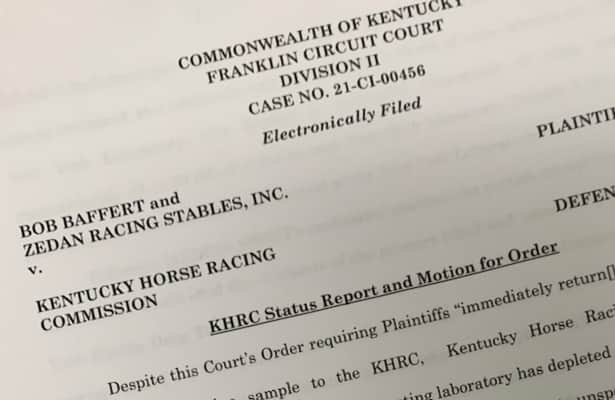 The added testing came after Medina Spirit’s trainer, Bob Baffert, and owner, Amr Zedan, sued to demand the split urine sample be examined after the primary specimen was allegedly damaged during transit.

According to the Monday filing, reported earlier by the Blood-Horse and obtained by Horse Racing Nation, the split urine sample was sent Wednesday to the New York Equine Drug Testing and Research Laboratory in Ithaca, N.Y., in the care of representatives of both sides in the lawsuit.

Once there, the KHRC claimed its representatives attempted to recover the remnants of the primary sample, which had been previously damaged in transit to the lab.

“Suffice it to say that the statements contained in the KHRC’s filing are inaccurate,” Baffert’s attorney Craig Robertson said in a text message to HRN.

The KHRC was expecting to recover 25-30 milliliters of urine. Instead, the remnants it received were down to “a urine tube with one to two (milliliters) of fluid, the bloody serum separator tube that had been damaged in transit and another tube with serum that had been saved,” said KHRC attorney Marc Guilfoil, who asked where the rest of the urine sample was.

Guilfoil claimed in a filed affidavit to have been told by Dr. George Maylin, head of the New York lab, that the urine had been used up in “testing.”

The filing said Maylin also claimed to have not read the judge’s order to return the primary sample to the KHRC despite having been sent a copy.

“I twice asked Dr. Maylin what type of testing had been conducted,” Guilfoil said in the affidavit. “Dr. Maylin did not give me a clear answer.”

The KHRC submitted evidence showing it was told that the primary urine sample had never been tested because it was damaged in transit to the lab.

“Plaintiffs (attorneys for Baffert and Zedan) repeatedly assured this court and the KHRC that no testing had been performed on the primary urine sample, which remained at the New York laboratory,” the filing read. “It was reasonable to rely on such representations, because plaintiff’s attorney Clark Brewster admitted that he or his team had been in contact (with the lab).”

“We have intentionally had no direct communication with the New York lab, so we are unaware of the status of any testing or the results,” Robertson said. “We are waiting like everyone else.”

Robertson told HRN he would file a response this week.

Judge Thomas Wingate granted the KHRC’s request Monday for an order calling on Baffert and Zedan to disclose what testing had been performed on the allegedly contaminated primary specimen as well as the results of that testing and the dates it was performed.

“The KHRC finds itself with unfairly limited resources, either because of a lack of candor and contemptuous conduct by the New York laboratory, plaintiffs or both,” the KHRC’s filing read.

The further testing came after Medina Spirit tested positive for betamethasone following his win in the May 1 Kentucky Derby. The split blood sample confirmed that initial positive.

Baffert, Zedan and company requested the urine specimen be tested to try to prove the positive was a result of a skin cream as opposed to an injection, which they claim makes a difference when considering whether the colt should be stripped of his Derby victory.