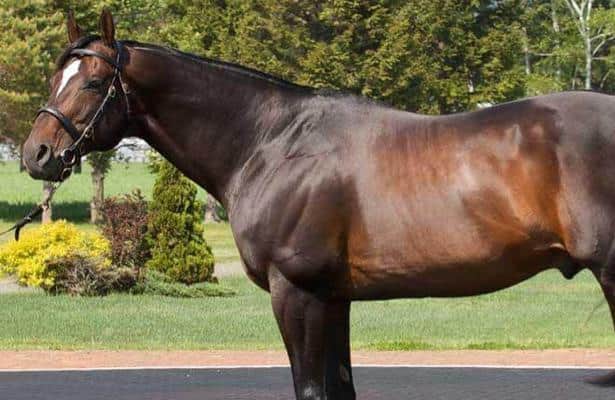 Empire Maker — who as a sire of sires is responsible for 12 Grade 1 winners, including two Kentucky Derby heroes — died Saturday.

Gainesway Farm announced that its stallion passed "after a battle with a rare disease that compromised his immune systems." Empire Maker was 20.

“He was the epitome of class and quality,” said Antony Beck, CEO of Gainesway. “I have never been involved with a stallion that possessed a better disposition. His impact on the breed has been significant, particularly producing very sound stock. He will be missed by all of us at Gainesway.”

The Juddmonte Farms homebred, of course, was a Grade 1 winner himself as Unbridled's best runner. Bobby Frankel trained Empire Maker to victories in the 2003 Florida Derby and Wood Memorial before he finished second to Funny Cide as the Kentucky Derby favorite. Empire Maker wheeled back five weeks later to take the Belmont Stakes.

Among Empire Maker’s progeny were champion Royal Delta and the classic-placed Bodemeister and Pioneerof the Nile.

Empire Maker, who began his stud career with Juddmonte, also stood in Japan before returning to the U.S. at Gainesway in partnership with Don Alberto Stable.

“We are heartbroken that he won’t be with us anymore," said Carlos Heller, the owner of Don Alberto. "He was such a special horse to our family in so many ways and was our first major stallion interest since the establishment of Don Alberto Farm in the U.S.  It is a huge loss not only for our family and our friends at Gainesway but also for our breed. We will always remember him as such a generous horse, always giving his best at every stage of his life.

“We can say that he was aptly named and indeed made an empire that keeps growing every day through his progeny.  We were fortunate to have been involved in a small part of his life. An incredibly intelligent and kind horse that will be sorely missed by everyone. We hope that his last few crops here in the U.S. will make his name shine even brighter in years to come.. I would like to take a moment and extend my gratitude for all of the outstanding care and support he received at Gainesway.  I particularly want to express my appreciation to Antony Beck and his staff at the farm, as well as Dr Slovis and Dr. Javernick.”

In 2019, Empire Maker’s leading Keeneland September Yearling fetched $2 million, showcasing his staying power. He also has a promising 3-year-old in Eight Rings, a Grade 1 winner at 2 on the Kentucky Derby trail.

A few photos of Empire Maker from Nov. He leaves a big legacy behind as the grandsire of two KY Derby winners (one who was Champ Freshman last year, the other who has first foals) and the grandsire of a few other extremely promising stallions in addition to his own Eight Rings. pic.twitter.com/gpfgu7agsj

Awful, awful news from @Gainesway. My heart goes out to the countless fans of the wonderful Empire Maker. I was at #BelmontPark the day he broke his maiden, and his ample presence even then, as a debuting two-year-old, was impossible to miss. Glad to have seen him in retirement. pic.twitter.com/M2FHYEdTGg

Glad I took the time to visit Empire Maker in November. #RIP pic.twitter.com/eIJazPKlaU