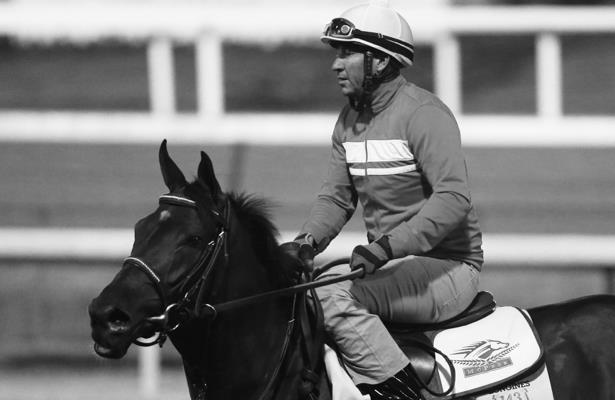 Training was canceled Saturday morning at Churchill Downs just after 5:45 a.m., when 42-year-old exercise rider Odanis Acuna died as a result of injuries when his mount broke down on the track.

Acuna, who worked for trainer Kenny McPeek, was breezing unraced 2-year-old New York Harbor. Nearing completion of the workout, the colt and Acuna suddenly fell about a sixteenth of a mile before the finish line when New York Harbor endured catastrophic injuries.

According to Churchill Downs, onsite emergency medical technicians who arrived on the scene to treat Acuna believe he died instantly.

“Today is a somber day,” said Churchill Downs Racetrack President Kevin Flanery. “We extend our deepest sympathy to Odanis’ family, friends, colleagues and the entire team at trainer Kenny McPeek’s barn. Our hearts are with them in this difficult time of extreme sorrow.”

Known to his racetrack friends as “Cuba” – a nod to his native homeland – Acuna is remembered by friends as a tireless worker who was dedicated to improving the life of his family.

“Odanis was one of the hardest working guys you’d ever meet; he was working the American dream,” said McPeek, who employed Acuna for nearly a decade. “He galloped for me in the morning and worked for the feed company in the afternoon.”

“He was just a wonderful, wonderful person,” said Sherry Stanley, Executive Director of the Backside Learning Center at Churchill Downs. “His entire existence was focused on bringing his wife and three sons from Cuba to here in Kentucky. He was just about to finish the process of purchasing a home and the immigration paperwork to get them green cards.

“He was the hardest worker. I know everyone always says that about people on the backside but this guy was unbelievable. He worked as an exercise rider and went running out the gates after training every day to get on the feed trucks. He would work every day until 6 or 7 at night and always had a smile on his face. No one ever saw him angry or sad. He was just the happiest, most joyful person who was completely focused on his goal of getting his family here to Kentucky and settling down. This is just an unbelievable tragedy.”

“When he started with me he had little or nothing and he got himself pretty well setup and had been saving money,” McPeek said. “He bought himself a car and was getting ready to buy a house. He was hard at it all day, every day. We worked together a long time and he traveled with us wherever we went. He rode a lot of my best horses for years and was a guy who could handle just about any horse you put him on. He was just a good guy and loved what he was doing. I am just sickened by this tragedy.”

This was first known training accident at Churchill Downs that resulted in the death of an exercise rider in several decades, according to veteran horsemen and track officials.

Funeral arrangements, a memorial service and fundraising efforts for the family are pending.

Life Is Good dazzles in smashing debut at Del Mar
What might now be Bob Baffert's leading 2021 Kentu...