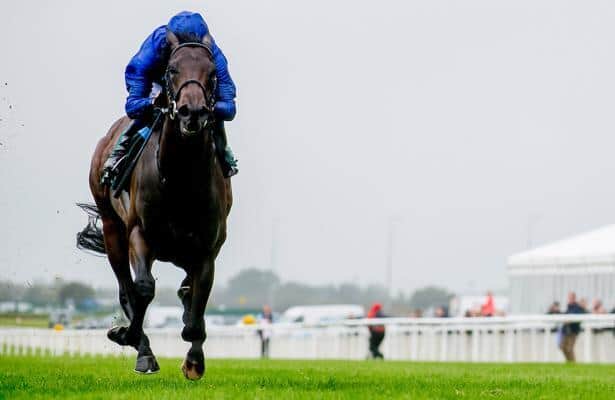 European sensation Pinatubo, unbeaten in six starts as a 2-year-old last season, remains on schedule to make his 2020 debut in the 2000 Guineas now set for June 6.

The Racing Post reports that trainer Charlie Appleby believes the son of Sharmadal is bigger and stronger than when last seen in the fall when running off with the Vincent O'Brien National Stakes (G1) before lasting over some tiring turf in the Dewhurst Stakes (G1).

"At this time of the year, the question everybody is asking is, 'Has he trained on?'" Appleby told Racing Post's James Stevens. "We're not going to have conclusive proof until the Guineas, but my gut feeling is that he has.

"No buttons will be pressed until the big day but from what we're seeing at home, he's gone the right way."

The Godolphin homebred Pinatubo was rated a 128 by handicappers, two pounds higher than the great Frankel as a 2-year-old. Frankel went on to achieve a 136 at 3 and 140 at 4, with Pinatubo needing plenty of improvement to keep up with that historic pace.

Appleby has spoken often of Pinatubo as a horse wise beyond his years, not looking overly impressive in the mornings before uncorking some major afternoon efforts.

"Mentally, I see no change in him," the trainer told Racing Post. "His demeanor is the same from 2 to 3. He remains totally relaxed. Physically, though, I do see change. He has grown and strengthened over winter."

The one-mile 2,000 Guineas at Newmarket is the first race on the rescheduled British Classics calendar. Pinatubo also is entered in the longer Derby in July. The St. Leger Stakes at Doncaster then completes the rarely attempted Triple Crown.