Report: DRF may be sold to a gaming company 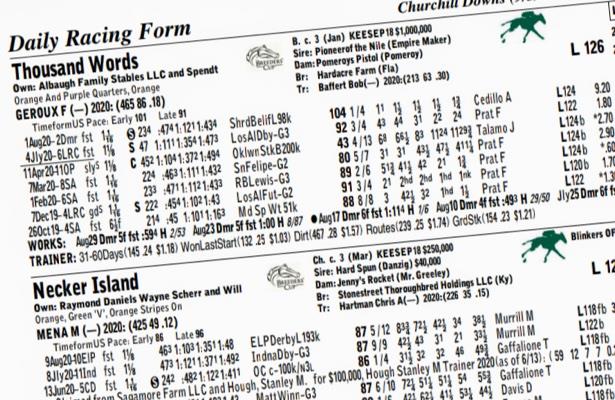 For the seventh time in the last 32 years, the Daily Racing Form could be looking at new owners. The reported buyers all are very familiar with the business of gambling.

According to a Tuesday report from Bloomberg, the private-equity company Z Capital Group is considering options that include the sale of Sports Information Group, the owner of DRF in its various print and digital platforms.

The report listed three interested buyers — Penn National Gaming, DraftKings and Flutter Entertainment — that are involved in racing and/or sports gambling. FanDuel, which is owned by Flutter, and DraftKings have been fierce rivals since they established the daily sports fantasy model during the past decade.

Sports Information Group became the owner of DRF in 2007, when it was formed by Arlington Capital Partners, another private-equity company that had bought the racing publication and its assets in 2007.

Three years ago, Z Capital bought Sports Information Group and, with it, DRF, for less than $100 million from lenders who had supervised a restructuring of the company, Bloomberg reported.

Tuesday’s report said that Sports Information Group is working with Macquarie Capital to get bids from would-be buyers. Parent company Z Capital might be best known for its ownership of Affinity Gaming, which owns and operates five casinos in Nevada, two in Missouri and one in Iowa.

Created in 1894 by horse-playing Chicago sports editor Frank Brunell, the Daily Racing Form changed hands only once in its first 94 years. That was in 1922, when Brunell sold it for $400,000 to the Annenberg family’s Triangle Publications, which went on to publish magazines such as TV Guide.

When Triangle sold DRF to News America in 1988, that set in motion six ownership changes that coincided with the decline of racecourse spectators and print readership in favor of off-track betting and digital news sources. In recent years, DRF has responded by creating and expanding its online news platforms in addition to getting into the advance-deposit wagering business. The company has more than 15 million annual page views and 20,000 active ADW customers, according to Bloomberg.

Penn National Gaming runs 43 racing and gambling properties across North America, including Sam Houston Race Park in Texas. DraftKings has expanded from a daily fantasy site to add sports gambling in six states. Based in Ireland, Flutter Entertainment is a multinational company that not only owns FanDuel but also TVG, Betfair and race and sportsbooks in Europe.

Sports Information Group is led by Itay Fisher, a software developer by trade who has been an executive at gambling companies such as Coral and William Hill for most of his 15-year career. He joined the DRF ownership group two years ago and was promoted to CEO last December.