Country Grammer will miss a month because of ankle trouble 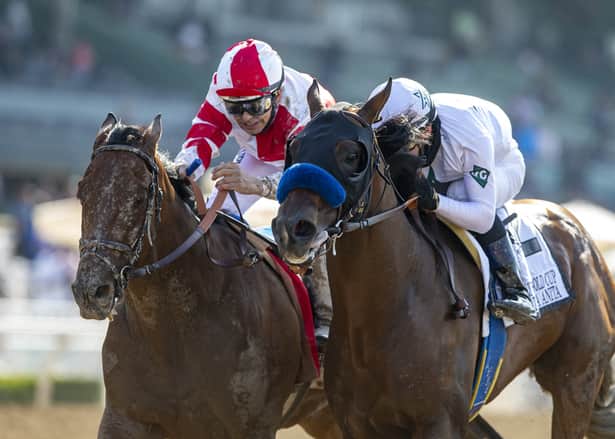 Nearly two months after his first Grade 1 triumph and barely a week after his last workout, Country Grammer has been sidelined indefinitely after being diagnosed with a problem in his right-front ankle, WinStar Farm CEO Elliott Walden confirmed Sunday.

Country Grammer's new trainer, Todd Pletcher, told DRF that the 4-year-old underwent an X-ray and an ultrasound after his team determined something was wrong.

"Todd said he had some filling in his ankle," Walden said. "After he breezed he got angrier as the day went on. The (X-ray and ultrasound) came back clean, so that's a positive."

Walden said veterinarian Dr. Larry Bramlage would examine Country Grammer, who will be sent from Saratoga to WinStar Farm in Versailles, Ky., to spend the next month.

This setback definitely takes Country Grammer out of the Whitney Stakes (G1) on Aug. 7 at Saratoga. As for races at the end of summer or this fall, Walden said "it depends on what Dr. Bramlage says."

After winning the Hollywood Gold Cup (G1) on May 31 at Santa Anita, Country Grammer had been mentioned as a candidate for the Breeders' Cup Classic. Bovada had him at odds of 16-1 on Sunday in its Classic futures. Walden said that race remains a possibility.

Country Grammer had not missed any workouts since that last race. He most recently breezed five furlongs in 1:01.65 last Saturday at Saratoga for Pletcher, who took on the Tonalist colt after his previous trainer, Bob Baffert, had been banned from racing at Saratoga. That ban was thrown out this month by a federal judge.

WinStar bought Country Grammer for $110,000 in the January 2021 auction at Keeneland, where the late Paul Pompa Jr.'s horses were sold. Chad Brown was the Tonalist colt's first trainer.