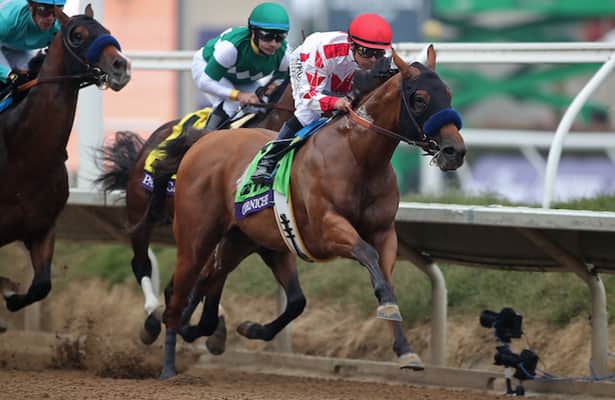 Corniche shed the frog on his right front foot in Sunday's Amsterdam (G2) at Saratoga, which likely was the cause of his last-place finish.

Trainer Todd Pletcher told Daily Racing Form that the injury will need time to heal on its own before a protective plate can be placed on it and training can resume.

The frog is soft tissue on the bottom of the hoof that acts as a shock absorber.

"Very tender as those things can be, I’m sure that didn’t feel very good as he was running," Pletcher told DRF. Corniche was the favorite for the Amsterdam, and he stumbled at the start, according to the Equibase chart.

The race was the 2022 debut for Corniche, who was 3-for-3 last year on his way to winning the Eclipse Award as champion 2-year-old male. Those wins came under trainer Bob Baffert.

In addition to his maiden, the Quality Road colt had wins in the American Pharoah (G1) and Breeders' Cup Juvenile.