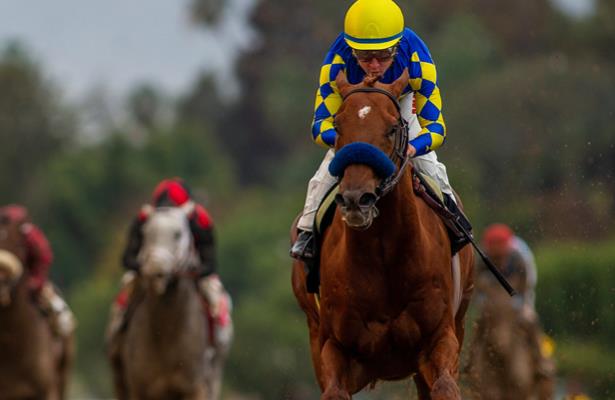 Unbeaten Arkansas Derby (G1) winner -- well, at least for now -- Charlatan could reportedly shorten up for his next start.

Speaking to BloodHorse's Bob Ehalt, trainer Bob Baffert said the 3-year-old Speightstown colt has the June 20 Woody Stephens (G1) as an option in addition to the day's feature in New York, the Belmont Stakes.

Baffert also has under consideration for the Belmont the undefeated Nadal, who won the second division of the Arkansas Derby on May 2.

"I don't want to rule anything out, because I may not like the way Nadal is training and I might start just Charlatan in the Belmont," Baffert told Ehalt. "In a perfect world, both of them will not start in the Belmont, but we'll see. It's still three weeks away."

Charlatan returned to the work tab Wednesday going a half mile in 50 seconds at Santa Anita Park. The drill was assigned the "breezing" tag indicating the ease with which the horse did it.

A timed move came one day after news leaked that Charlatan's initial post-race sample from the Arkansas Derby was flagged for a drug positive. The New York Times reports the substance in question is lidocaine, a pain reliever available via injection or as a topical medication. It is not a banned substance outside withdrawal times leading up to race day but cannot appear above a certain level in post-race tests.

Baffert has exercised his right for testing of a split sample at a referee lab, though he also expressed his disappointment that confidentiality in the process was lost before a ruling could be made by Arkansas officials. At stake, in addition to Charlatan's Grade 1 victory and purse money, are the 100 qualifying points he earned toward the Sept. 5 Kentucky Derby.

"The Woody Stephens was an option for Charlatan before (Tuesday) and I'm not going to let what happened since then change my thinking." Baffert told Ehalt, indicating the seven-furlong sprint could serve as a springboard back to two turns in Monmouth Park's July 18 Haskell Stakes (G1).

The Haskell is a 100-40-20-10 points prep that could also get Charlatan re-qualified, if needed, for the Kentucky Derby.

Charlatan, who's 3-for-3, has flashed speed at sprint and route distances. His Feb. 16 debut going 3/4 of a mile at Santa Anita was a 5 3/4-length victory that yielded a 105 Beyer Speed figure before he defeated winners going a mile on March 14 and received a 106 Beyer.