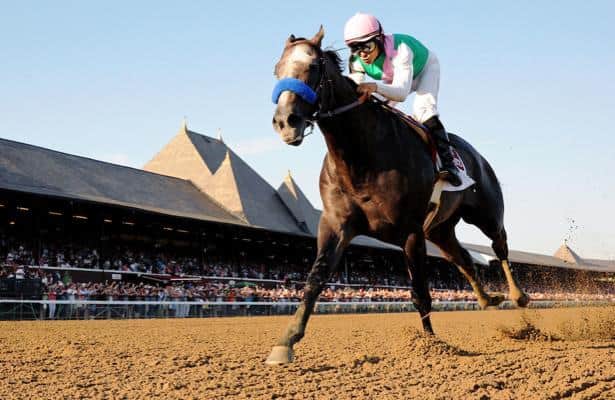 Ray Paulick, publisher of Paulick Report, tweeted that Arrogate developed “an apparent neurological issue in his neck.” In its official statement, Juddmonte Farms indicated the big gray was euthanized after an illness that began last week.

"It is still unclear what the illness was and a post-mortem is currently being carried out," the statement reads. "...Arrogate had a very successful breeding season this year until last week when his breeding was suspended due to an initial suspected sore neck. Later in the week he fell to the ground in his stall and efforts to get him back up proved unsuccessful. He was transported to the Hagyard Clinic under the care of Dr. Bob Hunt and Dr. Nathan Slovis with Dr. Steve Reed representing the insurance company.

"They worked tirelessly with the staff from the Hagyard Clinic, eliminating all the obvious causes and performing all available tests, including spinal tap evaluation, X-ray, ultrasound, CT Scan and many blood tests.

"Unfortunately, Arrogate was still unable to stand after four exhausting days for him. His will to fight, so valuable to him on the racetrack, became a challenge in his care. When serious secondary health issues set in, the decision was made to put him to sleep."

The son of Unbridled’s Song will be remembered as an especially talented late developer, breaking his maiden in June of his sophomore season before making the Travers his stakes debut. He stopped the clock in 1:59.36 for the fastest 1 1/4 miles ever run at Saratoga.

Arrogate then trained up to the Breeders’ Cup Classic, defeating eventual Horse of the Year California Chrome in a memorable stretch battle at Santa Anita Park. Two more scintillating performances — a win in the 2017 Pegasus World Cup (G1) and a come-from-behind Dubai World Cup (G1) victory — closed out the colt’s brief but remarkable run atop the racing world.

“We will never forget the ride Arrogate took us on," said Garrett O'Rourke, general manager at Juddmonte. "Those four amazing races established him as one of the great racehorses of our time, breaking 2 track records, taking down champion California Chrome in a battle for the ages and then running by Gun Runner in another worldly performance in Dubai.

"We hope that the heartbreak of losing him so young can be soothed by proudly watching the achievement of his runners.”

Once back from Dubai, Arrogate went 0-for-3, with each of those starts over the main track at Del Mar, where trainer Bob Baffert speculated his star wasn’t getting ahold of the surface.

Arrogate began his breeding career in Kentucky after going 7-1-1 in 11 starts on track, earning $17.4 million. Named the Longines World’s Best Racehorse in 2016 and 2017, Arrogate will be represented by his first 2-year-old foals to race in 2021.

“This is very hard on everyone at Juddmonte, most especially on Steve Dotsey, stallion manager, and Jorge Chavarria who cared for Arrogate daily and who had such a great rapport with him," said Douglas Erskine Crum, CEO of Juddmonte. "It was a bold decision to ask Bob Baffert to purchase and train top dirt horses for Prince Khalid and, assisted by Donato Lanni, the selection of Arrogate was one of the success stories of the decade on the racetrack.

"Arrogate has bred three crops at stud, has his first yearlings to present to sales this year and his physical and personality traits are passing very strongly to his offspring.”