Chad Brown is arrested, accused of choking woman at his home 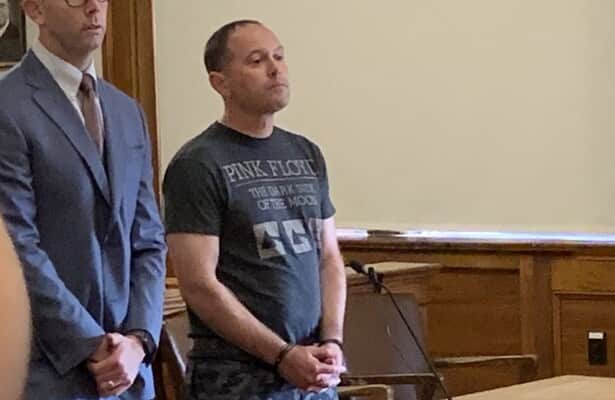 Trainer Chad Brown was arrested and jailed in upstate New York on Wednesday night, accused by a woman of choking her when she visited his home in Saratoga Springs, N.Y., police and media reports said.

Brown was charged with criminal obstruction of breathing, a police officer told Horse Racing Nation. He appeared in court and was released Thursday after posting $2,500 in cash to make bail, according to Sgt. Paul Veitch, a spokesman for the Saratoga Springs Police Department.

It did not appear Brown went to the track to saddle his two Saratoga starters Thursday. Assistant trainer Thomas Brandebourger stood in for him.

The judge who arraigned Brown said the woman claimed she was pushed down a staircase, pinned to the ground, choked and then pushed out of the house.

Details of Brown's arraignment in Saratoga Springs City Court were provided on Twitter by news anchor Subrina Dhammi of WNYT-TV in Albany. A video shot by Dhammi showed Brown leaving the courtroom while wearing a T-shirt, shorts and handcuffs.

According to Dhammi, Brown's attorney Joseph Gerstenzang claimed the trainer was defending himself from a break-in by the victim. Judge Francine Vero said she did not believe Brown's story, saying, "This court is not in the business of accusing domestic-violence victims."

Heggen told HRN that Brown was due back in court Sept. 2 for the next round of proceedings in the case. His charge is a class A misdemeanor, according to Heggen, with maximum sentences of $1,000 and 364 days in jail.

During Thursday's races at Saratoga, one of Brown's top clients came to the defense of the trainer. Owner Peter Brant told Daily Racing Form "he's not a person that would do something like this unless he was provoked.

"I think he's a smart guy with a lot of sense," Brant told DRF. "I was told he was woken up by this person and (she) started to hit him. He was obviously just protecting himself."

Brown, 43, a native of nearby Mechanicville, N.Y., is the leading trainer this summer at Saratoga with 27 wins from 110 races and purse winnings totaling $3,310,020. He has won four training titles at Saratoga and won four consecutive Eclipse Awards as the top trainer in the U.S. from 2016 to 2019. Brown won his second U.S. classic this year when Early Voting finished first in the Preakness.

The New York Racing Association had not yet made any statement about the report of Brown's arrest. As such, there was no indication whether Brown might be sanctioned as a result.

Brown had two horses entered in races Thursday at Saratoga. Nabokov is in an allowance that is the eighth race on the card. Robyn and Eli is in the ninth race, a New York Stallion Series Stakes. He also had 14 more horses in races drawn for Friday and Saturday.

Brown had not responded Thursday to a text message asking for his reaction. Another Dhammi video showed he did not speak to reporters who peppered him with questions outside the courthouse. Brown quickly got into the back of a car and was driven away.