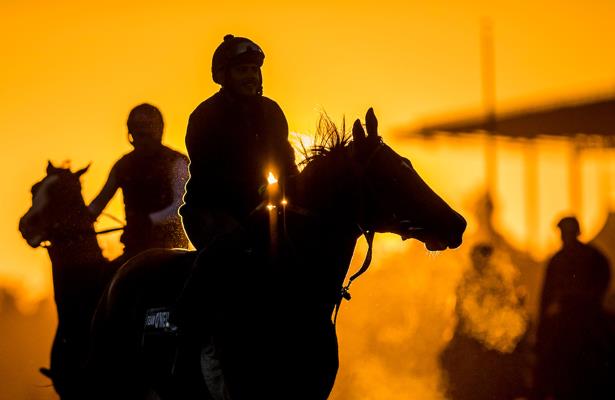 Photo: Eclipse Sportswire
New rules enacted by the California Horse Racing Board will strictly limit what medications horses can be administered after entries are taken for races, according to a Daily Racing Form report.
The changes, which were announced late Thursday, will eliminate the administration of phenylbutazone, flunixin, non-steroidal anti-inflammatories, ketoprofen, amino acid solutions and electrolyte solutions.
Updates were scheduled to go into effect for entries beginning on Sunday. Officials have indicated, however, that the draw may be postponed.
Trainers were notified of the changes Thursday night via a text message that read in part, “Horses entered to race shall only be given water, hay, and grain until post time” and that “no drugs, medications, or substances shall be administered to a horse after it is deemed entered to race.”

"The CHRB received no communications regarding 1843.5 during the public notice periods for both the emergency and permanent rules, and there were no comments during public hearings prior to approvals."

The changes have left horsemen frustrated and more than a bit confused, said trainer Eoin Harty, president of the California Thoroughbred Trainers.
“We were blindsided by this,” Harty told DRF. “How are you going to fill your races?”
Harty called for a 30-day moratorium on implementation to allow trainers time to understand the rules and alter procedures within their stables, adding, “I would think we need to take a step back and look at this for 30 days.”