Report: World No. 1 Baaeed’s next start could come in the Arc 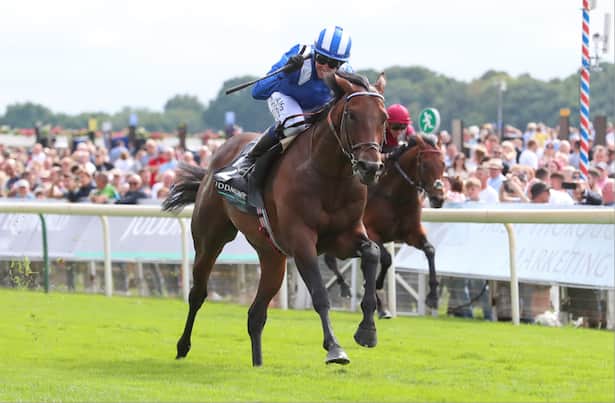 Trainer William Haggas suggested three scenarios for Baaeed after the 4-year-old went 10-for-10 with an impressive win in Wednesday's Group 1 Juddmonte International.

Racing Post reported that the 1 1/2-mile Prix de l'Arc de Triomphe (G1) is in the mix for the colt, who is owned by Shadwell Stable and is recognized internationally as the best active Thoroughbred in the world.

After the 1 5/16-mile Juddmonte, Baaeed's first race at a distance other than a mile, Haggas and Shadwell's Sheikha Hissa indicated that the colt would have one more start, in the Champion Stakes (G1) at Ascot next month, according to the report.

Haggas since told Racing Post, "There are three options. It's either Champion Stakes only, the Irish Champion and then the Champion Stakes, or the Arc de Triomphe."

Baaeed was "imperious" in winning the Juddmonte and beating Mishriff by 6 1/2 lengths, Haggas told Racing Post. And he said he "didn't see anything at York that suggested a mile and a half would not be within his reach."