Report: BC winner Tuesday is retired, date with Justify awaits 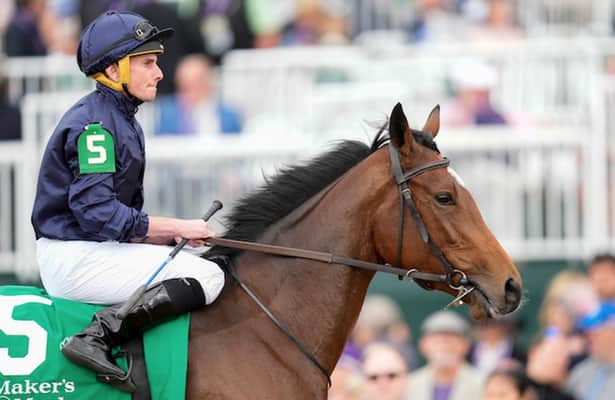 Tuesday, the 3-year-old filly who was victorious this month in the Breeders’ Cup Filly & Mare Turf at Keeneland, was retired by Coolmore with plans to unite her with 2018 Triple Crown winner Justify, according to a report in England.

“She’ll be staying in America, and I think the plan is for her to be covered by Justify,” Aidan O’Brien told Racing Post. The plan would be to bring Tuesday and Justify together at Coolmore’s Ashford Stud in Kentucky.

Sired by the late Galileo out of the Danehill Dancer mare Lillie Langtry, Tuesday also delivered a signature victory June 3 in the Epsom Oaks (G1).

Tuesday is a young 3-year-old, not having been foaled until June 2, 2019. Almost exactly two years later she finished second in her debut at the Curragh before getting a break for the rest of the season.

She began 2022 as a winning, odds-on favorite, breaking her maiden in a one-mile race on yielding turf at Naas, Ireland. After a third-place finish in the English 1,000 Guineas (G1) and a runner-up result in the Irish 1,000 Guineas (G1), Tuesday stretched to 1 1/2 miles and won the Epsom Oaks. It was her third start in less than five weeks.

Her next four results were fourth against males in the Irish Derby (G1), second to Alpinista in the Yorkshire Oaks (G1), fourth in the Prix Vermeille (G1) and sixth on bottomless ground in the Prix de l’Opéra (G1).

The one-length win over In Italian at the Breeders’ Cup came in the only race Tuesday would have on firm going.

The Coolmore homebred ended her racing career with $1,699,870 in earnings, applying the current rate of exchange to what was reported by Racing Post.