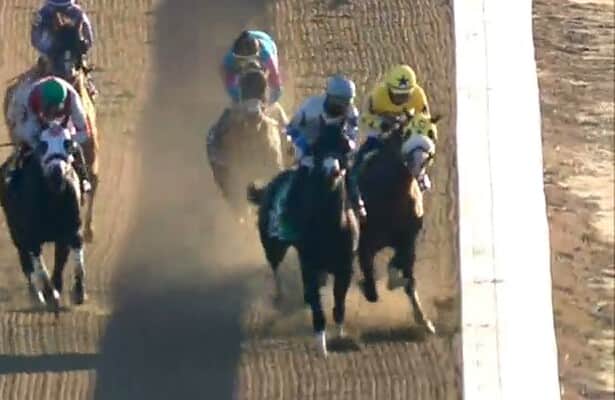 An aggressive ride that caused an apprentice jockey to fall off his horse Friday has put Irad Ortiz Jr. on a 30-day suspension by New York stewards, the Daily Racing Form confirmed Sunday night.

Ortiz was punished for his bold, inward move after the first 110 yards of a one-turn, 6 1/2-furlong claiming race on Aqueduct’s main track. A head-on replay of Friday’s eighth race showed Ortiz, riding Gran Casique, angling in several paths to make contact with Ragtime Blues, who was ridden along the rail by Omar Hernández Moreno.

It appeared Ortiz turned his head to look at Hernández Moreno, who fell to the track while Ragtime Blues kept running. Neither the fallen rider nor the horse was hurt badly.

Ortiz and Gran Casique were disqualified from their runner-up finish and placed last among the seven finishers.

The suspension covers 30 calendar days, according to DRF’s David Grening, who added that Ortiz is not appealing. Since he raced Sunday in his native Puerto Rico, Ortiz still has to confirm his acceptance of the suspension before the 30 days begin.

Stewards called Ortiz again to answer their inquiry and John Velázquez’s objection about his nose victory Saturday on Mo Donegal in the Remsen Stakes (G2), a points prep for the Kentucky Derby. Ortiz used a left-handed crop in the face of runner-up Zandon, with whom Mo Donegal made contact in the deep stretch. It took about 10 minutes before stewards let the result stand.

Ortiz and his agent Steve Rushing did not respond to Horse Racing Nation’s calls and texts seeking comment.