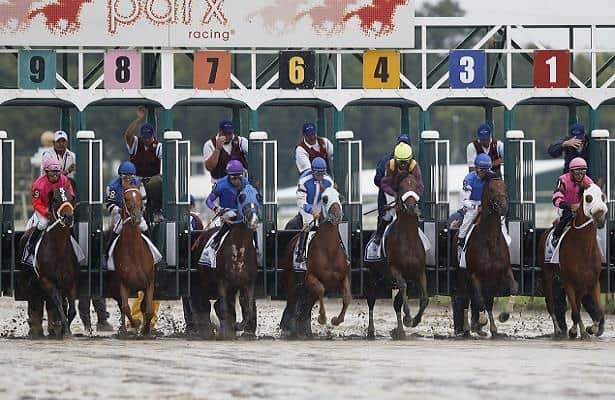 At least two unnamed trainers, a jockey and maybe a groom were suspended after they apparently were caught trying to sneak a gun, syringes, a buzzer and marijuana into Parx Racing, according to a report Saturday.

Bill Finley of Thoroughbred Daily News cited “numerous sources” who said several cars were stopped for searches before they came through the stable gates at Parx during the weekend. The track’s biggest race card of the year, featuring the Grade 1, $1 million Pennsylvania Derby, was held Saturday.

A groom was said to have tried to bring in the gun and marijuana, according to the TDN report. Weapons and drugs are illegal to have at Pennsylvania racetracks.

Only licensed veterinarians may use syringes at racetracks. Buzzers are the tiny, illegal devices that renegade jockeys have used to jolt horses into running faster.

The names of the suspended connections were not revealed by the commission.

The TDN pointed out that trainer Richard Vega was ruled last year to have been in possession of needles and syringes, the result of a search at Parx in July 2021. Vega was suspended for a two-year period that was scheduled to end June 28, 2023. However, he got back to training this year and had a horse in a race at Parx on Monday.