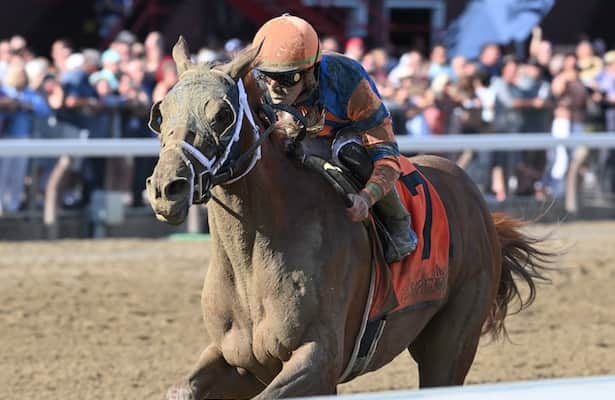 Now, Repole will be accompanied by owners St. Elias Stable and Phipps Stable as they join forces with stakes-winner Dynamic One for Saturday’s $1.25 million Travers.

Dynamic One, a son of Union Rags trained by Hall of Famer Todd Pletcher, won the Curlin on July 30 at Saratoga last out, following a distant 18th in the Kentucky Derby on May 1 at Churchill Downs.

Repole reflected on his memorable Travers coup in 2011, which he described as “the highs and lows of racing within a half hour.” One race prior to Stay Thirsty’s Travers win, Repole’s reigning champion 2-year-old Uncle Mo ran a hard-fought second in the King’s Bishop (G1), coming up a nose shy of victory to Caleb’s Posse.

“I remember going into the paddock just thinking that I couldn’t believe this horse came back and ran the best race of his life and lost by a nose,” Repole recalled. “I had to wake myself up when I went to the paddock. It was 30 minutes between one of the toughest losses of my life to one of the greatest wins of my life. The highest of highs and the lowest of lows all within thirty minutes. Uncle Mo ran the race of his life and Todd did an amazing training job with him, but he lost by a nose.”

But when Stay Thirsty captured the Travers, it raised Repole’s spirits.

“Being a kid from New York and winning the Mid-Summer Derby and having the prestige of the Travers and how long it’s been around was just thrilling,” Repole said. “As a kid, I couldn’t come to Saratoga because I never had a car that could make it up there. That year, I won both the Jim Dandy and the Travers with Stay Thirsty.”

Following the 2011 Travers, Repole received a trophy but also was able to keep the iconic Travers canoe painted in the colors of his silks.

“I made a donation to the backstretch and toward horse rescue,” Repole said. “Of all the trophies I ever won, the Travers Repole Stable canoe in my backyard is the greatest trophy of my life.”

While Repole was the standalone owner of Stay Thirsty, he has partnered with prominent thoroughbred powerhouses in campaigning Dynamic One, who is also owned by Vinnie and Teresa Viola of St. Elias Stable as well as the Phipps family, whose iconic black silks and cherry cap have won the Travers three times.

Dynamic One will race in the dark green and white colors of St. Elias Stable.

“Success is best when shared, and nothing would be more special,” Repole said. “This Travers will be in their silks, and winning my second Travers in their silks would be just as important as winning with my silks. I’ve won a Travers, the Phipps have won three, and now it’s time to give Vinnie and Teresa a Travers win.”

Repole gave Daisy Phipps Pulito, daughter of the late Ogden Mills Phipps who manages Phipps Stable, credit for selecting the mating between Union Rags and the Smart Strike mare Beat the Drums, who is out of 2002 champion 2-year-old filly Storm Flag Flying and a descendant of undefeated Hall of Famer Personal Ensign.

“She has run Phipps Stable, and it was the first year since her father’s passing that she did the breeding for the mares that they have,” Repole said. “She chose Union Rags for that mare and she got this amazing horse. Vinnie and I are so blessed to be here for the ride with them, it’s just amazing.

“I love what they’ve done for racing, I’ve watched them for years growing up,” Repole continued. “Horses such as (Hall of Famers) Personal Ensign and Easy Goer come to mind immediately, and now knowing that we’re partners with Daisy and her brother, it’s incredible. On Friday night we’ll probably do a family dinner with the Phipps, Violas and Repoles. It’s been a lot of fun. The families will all get together, have a good time – and who would’ve thought about a partner like this 10 years ago?”

Repole said Dynamic One always has been a horse that Pletcher held in high regard.

“I look at sheet numbers, but I also use a different strategy. I use the Todd Pletcher eye and the Todd Pletcher brain,” Repole said. “He has come into Todd’s barn as a 2-year-old and Todd told me, ‘He trains like the 1 percent of horses I’ve had in my stable ever.’ Unfortunately, he didn’t put it together in the afternoon right off the bat. Usually when Todd says that, they come along and it clicks.”

The Curlin was a long-awaited stakes conquest for Dynamic One, which Repole said solidified Pletcher’s early comments about the horse.

“I think what we saw in the Curlin is what Todd has been saying for a year now. Here is a horse with tremendous talent,” Repole said. “After the Derby we sent him to Fair Hill, almost like a mental health rehab and we just got him away from track life to put him in a calmer setting and have him grow up a bit. Since then, he’s been training great, and he ran a huge race in the Curlin.”

Repole said he believes Dynamic One is finding his best footing in the second half of this season.

“Many times there are the first-half 3-year-olds that develop early and then there are the second-half 3-year-olds. I think this is that second half type of horse,” Repole said. “Maybe he goes Travers, Woodward and Breeders’ Cup Classic, but it’s one race at a time. I think that this is a horse that’s getting better and better. I think the best of Dynamic One is to come at the end of this year and all of next year.”

Regardless of Saturday’s result, Repole said he will be happy just to be surrounded by quality company.

“I always have said horse racing could get my family together, but it’s also increased the size of my family,” Repole said. “Win, lose, or draw, we’re going to celebrate life. It’s great when you win with a bunch of people you like and enjoy being with. I never imagined horse racing would have given me this.”