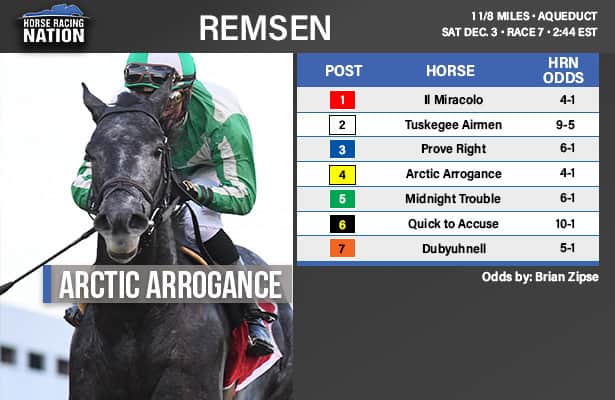 Racing on the 2023 Kentucky Derby trail in New York resumes on Saturday at Aqueduct with the Grade 2, $250,000 Remsen Stakes. The 1 1/8-mile contest, which is the second official Derby qualifying race of the year at the Big A, attracted a field of seven 2-year-olds and offers points to the top five finishers (10-4-3-2-1).

Last year the Remsen featured the controversial stretch battle between Mo Donegal and Zandon. They both went on to run in the Kentucky Derby, finishing fifth and third, respectively. Normandy Invasion, Wicked Strong, Frosted and Mohaymen were all in the top three in the Remsen in 2013 to 2016 and then went on to run fourth in the Derby.

Here is a full-field analysis for the Remsen with morning-line odds provided by the Horse Racing Nation staff. This Grade 2 is scheduled as race 7 of 10 on a card that has four graded stakes.

1. Il Miracolo (4-1 – Gun Runner – Antonio Sano / Javier Castellano – 4: 1-3-0 - $49,600) After three second-place finishes, Il Miracolo broke his maiden in his fourth try at Gulfstream Park with a front-end effort going a one-turn mile and beating a field of seven by 5 1/2 lengths. Trainer Antonio Sano was impressed enough with Il Miracolo’s win to ship to New York to try the Kentucky Derby trail. Use underneath.

2. Tuskegee Airmen (9-5 – Street Sense – John Servis / Luis Saez – 2: 2-0-0 - $120,000) Tuskegee Airmen is unbeaten after two career starts. He won his debut at his home base at Parx after a closing rally by more than five lengths at odds of 2.90-1. A few weeks later trainer John Servis of Smarty Jones fame shipped him to Delaware Park, where he won the Rocky Run Stakes by 3 1/4 lengths going a two-turn mile as the odds-on favorite. Servis won the 2004 Remsen with Rockport Harbor. The one to beat.

3. Prove Right (7-1 – Justify – James Chapman / Jose Gomez – 8: 1-1-2 - $110,070) Trainer James Chapman specializes in finding bargain yearling purchases and Prove Right is one of them, having sold for $15,000 at the Keeneland September sale. He broke his maiden in his second try in June at Churchill by more than three lengths in a race restricted by a sale price of less than $45,000. Although his record shows only one victory, in August he finished in front in an allowance at Timonium but has disqualified and placed third for interference in the final turn. A month ago, he set the pace in the one-mile Nashua (G3) at Aqueduct and finished third. Toss.

4. Arctic Arrogance (4-1 – Frosted – Linda Rice / Jose Lezcano – 3: 2-1-0 - $183,400) The New York-bred Artic Arrogance will make the move to open company for the first time in his fourth start. He was a debut winner at Saratoga and then was second in the Bertram F. Bongard stakes at Aqueduct at the end of September as an odds-on favorite. He became a stakes winner the following month when he stretched out to a mile in the Sleepy Hollow, beating a field of 10 by 4 1/2 lengths. He will come back from a two-month layoff. Trainer Linda Rice notched a Remsen victory in 1996 with The Silver Move. Top choice.

5. Midnight Trouble (6-1 – Midnight Lute – Peter Walder / Paco Lopez – 6: 2-1-3 - $109,850) Since June, Midnight Trouble made six starts at Delaware Park, breaking his maiden in his third start after pressing the pace in a six-furlong sprint. Stretching out to a mile he beat a field of six by almost eight lengths in an N2L allowance. In the fall, the son of Midnight Trouble ran third and then second in stakes. All of those starts at Delaware were for trainer Anthony Pecoraro. Peter Walder is now listed as the trainer for the same owner, and he registered two workouts at Belmont Park in preparation for the Remsen. Midnight Trouble was a $13,000 yearling purchase at the Keeneland September sale. Toss.

6. Quick to Accuse (10-1 – Accelerate – Horacio De Paz / Manny Franco – 3: 1-1-0 - $87,630) Quick to Accuse made all three of his starts in New York-bred company. He made his first start on a sloppy track at Saratoga and pressed the pace going seven furlongs, ending up in fourth. Going a mile in the Belmont at the Big A meeting, he went right to the lead and drew off to win by almost 10 lengths. Moving up to stakes racing, Quick to Accuse was second behind Arctic Arrogance in the Sleepy Hollow. Win contender.

7. Dubyuhnell (5-1 – Good Magic – Danny Gargan / Jose Ortiz – 2: 1-0-0 - $58,550) Dubyuhnell got his first win in his second try in a mile race that was meant for the turf but was run on a sloppy track during the Belmont at the Big A meeting with blinkers on with a closing move. This son of Good Magic and the outstanding mare Wild Gams was bred by Stonestreet and runs for them as part of a partnership. In his first start at Saratoga he was fourth behind Instant Coffee, the recent Kentucky Jockey Club winner. Win contender.

Summary: This year’s Remsen Stakes might not have any big names like last year, but it has a contentious field of seven that looks like a battle between 2-year-olds shipping to Aqueduct for the first time and those based in New York.

The New York-breds Arctic Arrogance and Quick to Accuse along with Dubyuhnell have the home-track advantage in the Remsen.

It is common for shippers to have difficulty handing nine furlongs at Aqueduct. That will lead me to make Artic Arrogance the top choice based on his last two starts in stakes at the Big A, including his last race, when he stretched out to a mile to win by 4 1/2 lengths.