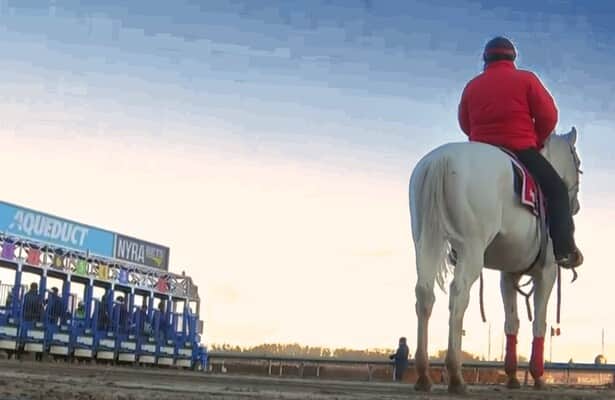 Go figure the Grade 2, $250,000 Remsen Stakes. Historically speaking, it is not easy compared with other Kentucky Derby points preps.

Last weekend, Instant Coffee was the fifth consecutive closer to win the Kentucky Jockey Club (G2), typical of the style that succeeds in prep races at Churchill Downs. It has been just the opposite at Santa Anita, where 12 of the last 20 runnings of the track’s Derby preps for 3-year-olds were won by frontrunners.

At Aqueduct, the Remsen has not had a clear pattern. In the last 12 years, four winners showed early speed, five came from at least three lengths off the pace, and three were close to the pace. Those stalkers included Mo Donegal, who won last December.

These have been the Remsen winners’ past-performance lines since 1991, according to Equibase charts:

Saturday’s renewal of the 1 1/8-mile race is expected to include potential pacesetters Arctic Arrogance, Midnight Trouble and Prove Right as well as stalker Quick to Accuse and closers Dubyuhnell and 2-for-2 Tuskegee Airmen.

It has been far easier to see what Remsen styles fit on the road to the Kentucky Derby. Of the last 14 horses to graduate from the New York prep, 10 have been closers. Mo Donegal and Zandon came from off the pace to finish 1-2 in the 2021 Remsen. Zandon went on to finish second and Mo Donegal fifth in a Derby that rewarded 80-1 winner Rich Strike, who closed on the suicidal early pace.

These were the horses who raced in both the Remsen and Kentucky Derby since the fall of 1999, with Quirin Speed Points showing their running styles:

The 2019 foals who came through the New York preps last season had exceptional Triple Crown results in 2022. Early Voting, who scored last February in the Withers (G3) and placed second in the April running of the Wood Memorial (G2), finished first in the Preakness. Nest parlayed her victory in the 2021 Demoiselle (G2) at Aqueduct into a second-place finish to Mo Donegal in the Belmont.

However, the 108 previous runnings of the Remsen have produced only six Kentucky Derby winners and none since 1995.

Of the current points races that were established as preps before 2000, only the Sam F. Davis (G3), Iroquois (G3) and Gotham (G3) have had longer droughts than the Remsen when it comes to producing a Derby winner.

Entries for the Remsen will be taken Wednesday. The race will be run on the Cigar Mile Handicap (G1) undercard.