'Duty to protect'; Remington horses out of Zia Park Derby 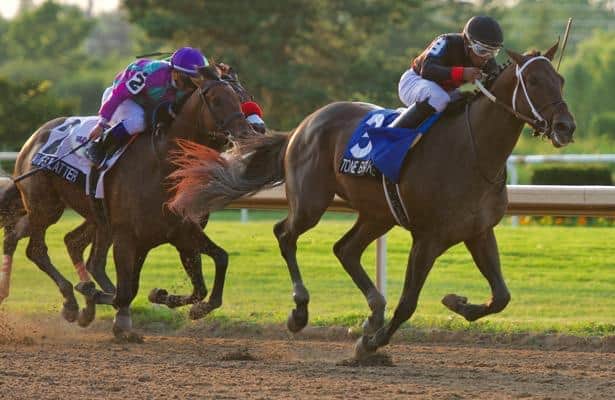 Photo: Konrad Weeber/HRN
Nine Remington Park-based horses that were entered into Wednesday’s Land of Enchantment" card at Zia Park will be scratched due to three positive cases of Equine Herpesvirus-1 reported at the Oklahoma City track.
The New Mexico Racing Commission made the decision Thursday, and Zia Park officials have been in contact with trainers of horses who are stabled, recently raced, or have worked at Remington Park, including three horses that were slated to compete in the featured Zia Park Derby.
“We already took entries for the races. In the meantime, Remington had three positive EHV-1s. Erring on the side of caution, the New Mexico Racing Commission and the state veterinarians have decided not to allow any horses from Remington Park currently stabled there or have been stabled there to enter Zia Park or Albuquerque Fairgrounds,” said Michael Schamburg, Racing Secretary at Zia Park. “That, in turn means we will have a lot of scratches from Wednesday’s card.”
Ismael “Izzy” Trejo, Executive Director of the New Mexico Racing Commission, did not want to put the state’s horses and horsemen in a similar position as what happened at Sunland Park in 2016, when multiple cases of EHV-1 -- a contagious virus known to cause severe respiratory and neurological issues -- caused a shutdown of racing at the track, including the cancellation of the Sunland Park Derby (G3), the track's Kentucky Derby prep.
“I jokingly say, ‘Texas says remember the Alamo, but in New Mexico we say remember Sunland Park 2016,'" Trejo said. "It was something that devastated the industry here. People can say we are being overly cautious, but we have a duty to protect our horse population as well as our horsemen in their operations. We take the matter pretty serious, and I think we made a sound decision based on that idea of taking care of those two facets.”
Remington Park first had a case of EHV-1 last week, but two more cases were confirmed on Thursday. That prompted the racing commission to make a decision with the 10-race race card featuring seven stakes races set to run on the day before Thanksgiving.
“Zia Park officials started making some phone calls a couple days ago as we were trying to make a decision. We wanted to see how things developed at Remington. We’re getting to close to this big race day and we felt we needed to make that precaution at this time,” said Trejo.

“Nothing you can do -- it’s just one of those things that happens in this business," added Michael Levinson, whose L and N Racing campaigns Zia Park Derby morning line favorite Tone Broke along with older horse Lookin At Lee. "Hopefully no more horses get sick."