Remember these six racing oddities that were fitting for 2020 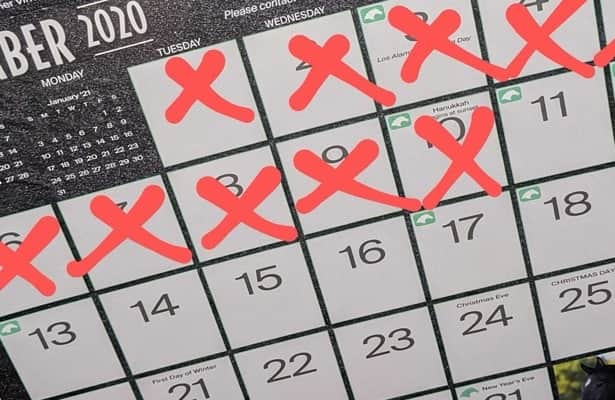 Every bit of bad news, weird news, rain-on-a-wedding-day news that has happened this year has seemingly been greeted by the same reaction.

Racing was right in step. What may have been the biggest story of the year – the federal raid on the barns of Jason Servis and Jorge Navarro – was itself overshadowed within two days by the sweeping shutdown of sports because of the pandemic. Most sports except racing.

Rather than fight the ongoing theme, here is a paean to it. Actually, the first of a pair. There were enough strange events, circumstances and assorted oddities that half will be presented here – and another half next Friday. That it had to be split in two was, of course, “so 2020.”

It was a quiet Monday in early March when the news bolted out of the Southern District New York office of the Justice Department. Servis and Navarro were the big names among the 27 defendants accused of illegally drugging racehorses. What had been industry whispers were amplified from the bottom of federal prosecutor Geoffrey Berman’s lungs. By the end of the year some of the defendants accepted deals for lesser sentences, charges had been added to the original indictments, and Servis and Navarro pleaded not guilty as they waited for their next day in court. The most “so 2020” chapter of this story came in June. That was when the Trump administration fired Berman, who had gone after some of the president’s allies.

Nine days before he became an accused felon, Servis saddled Maximum Security’s victory in the inaugural Saudi Cup. The $20 million race should have been “so 2019,” when it was originally scheduled to be run. Organizers silently postponed it to Feb. 29 of this year, just in time for Max to win the race by three-quarters of a length over champion mare Midnight Bisou. Even though the federal drug case did not specifically implicate Maximum Security, its specter led the Jockey Club of Saudi Arabia to freeze the $10 million winner’s prize from owners Gary and Mary West.

Saudi racing authorities really got after Hall of Fame jockey Mike Smith for using his crop to hit Midnight Bisou 14 times, four more than legal under the rules there. Rather than give Smith the benefit of the doubt as a first-time visitor, they fined him $210,000. It was by far the biggest penalty ever imposed for a riding infraction. Smith and Irad Ortiz Jr. were also handed suspensions of unprecedented length, again for overusing their crops. If big-name jockeys do not show up for the 2021 Saudi Cup, it will not be hard to figure out why.

Back to the Wests. Their court fight to reclaim the Kentucky Derby victory stripped from Maximum Security appropriately spilled into 2020. It ended Aug. 28, when they said they would not appeal a federal-court rejection of their plea. As judge John Bush wrote, “Neither Kentucky law nor the 14th Amendment allows for judicial second-guessing of the stewards’ call.” The controversial result, then, became truly final 482 days after it was made “official” – and only eight days before this year’s Derby.

You can’t tell the horses without a program. Or a lip tattoo. Or a training staff that is paying attention – which Aidan O’Brien’s was not in October. That was when 50-1 long shot Snowfall finished a stunning third in the Fillies Mile (G1) at Newmarket. Except it was not really her. It was 18-1 Mother Earth. O’Brien’s crew got its horses mixed up for that race, putting the wrong saddle cloths and jockeys on Snowfall and Mother Earth. COVID complications kept O’Brien from being there that day. He apologized and accepted full responsibility while bracing himself for a big fine.

Quick. When was the last time before 2020 that the Belmont Stakes was the first U.S. classic to be run in a given year? The answer: 1872. OK, trick question. That was before the inauguration of the Preakness Stakes the following year and the Kentucky Derby in 1875. Because it opened this year’s delayed Triple Crown campaign, the Belmont was cut to nine furlongs for the first time since 1894. Coming four months late, the Kentucky Derby was run for the first time with 3 1/2-year-olds. Coming last, the Preakness featured a grown-up Swiss Skydiver, only the second filly to win the race since the Coolidge administration. Normally confined to five weeks, this year’s Triple Crown took three times as long, making it a potential pain in the asterisk. But in a nod to normalcy this was the 10th time in the last 15 years that the three races produced three different winners.

What about the bad timers, the bad timing, the bad feed? Or the gate that malfunctioned, got stuck and was misloaded, all in the same meet? Those will all be covered next Friday. After all, there is only so much 2020 that one can take in a single day.