Regal Glory scores in Matriarch, gets her first Grade 1 win 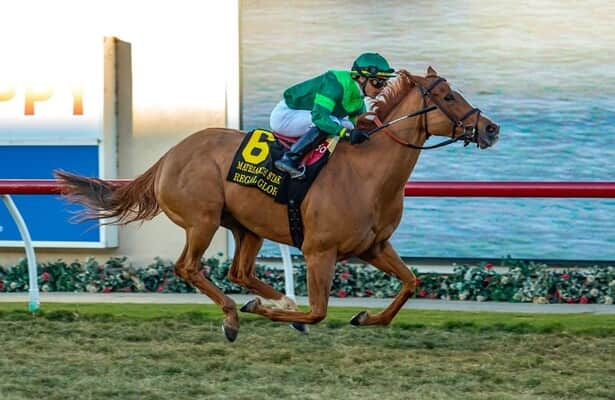 The chestnut mare by Animal Kingdom was shipped east from the powerhouse Chad Brown stable, and she walked her beat in handy fashion to tally by 2 1/2 lengths in 1:35.33 for the mile on firm grass.

She was ridden by Jose Ortiz, who earlier Sunday won the Cecil B. DeMille Stakes (G3) on the Brown charge Verbal.

“I thought I’d have the lead and thought I was the only real speed in the race,” Ortiz said. “The horse inside (Princess Grace) has speed, but when she used it last time she didn’t finish. So I thought I’d be out front, and it worked out just that way. We got away with some easy fractions, and then she had lots for the finish.”

Heider Family Stables’ Zofelle chased Regal Glory home in the Matriarch and finished a length in front of race favorite Princess Grace, who performs in the colors of Susan and John Moore.

The tally was Brown’s fourth in the eight runnings of the Matriarch conducted at Del Mar. The race had been run 33 additional times previously at Hollywood Park.

The stakes win was the fourth of the meet for rider Ortiz but his first in the Matriarch. He now has six stakes wins at Del Mar.

The stakes win was the second of the meet for trainer Brown but his fourth in the Matriarch. He now as 14 stakes wins at Del Mar.