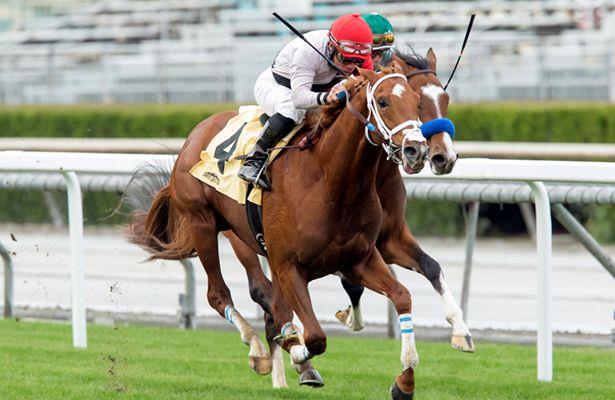 In his first try on turf, Vending Machine, who was a close third with a quarter mile to run, rallied to take Friday’s $75,000 Eddie Logan Stakes at Santa Anita by three quarters of a length, providing Norberto Arroyo, Jr. and Peter Miller with a stakes double. A Kentucky-bred colt by Hard Spun, Vending Machine got one mile on a turf course listed as good in 1:35.87.

“I was grateful, thankful to have the horses I did going into both stakes today,” said Arroyo, who took the Kalookan Queen Stakes earlier in the day with Miller’s Bad Ju Ju and who also notched his third overall win on the afternoon. “I have been working both of Pete’s horses down at San Luis Rey (Downs, Training Center). They’re both doing very well and thank God they both showed up today.”

When asked about running Vending Machine on turf for the first time, Miller responded, “I trained his half-brother, Comma to the Top, and he won the Generous Stakes (Grade III, one mile) on the turf and being a Hard Spun, his progeny have done well on turf so I thought he’d like it.”

Owned by the Sinnott Family Trust, Vending Machine registered his third win from seven starts and with the winner’s share of $47,520, he increased his earnings to $104,325.

Favored at 2-1 with Drayden Van Dyke up, Soglio flew late to nab pacesetter Cistron for the place by a head. Soglio paid $4.20 and $3.00.

Cistron, who assumed command right out of the gate, had a one length advantage on the winner turning for home but had to settle for third, 1 ¾ lengths in front of Curly’s Waterfront. Off at 3-1 with Luis Contreras, Cistron paid $3.20 to show.

Santa Anita’s newly created Single Ticket Pick Six Jackpot was not hit on Friday, so with three days of Winter Meet racing in the books, there is a Single Ticket Jackpot carryover of $212,103 into Saturday.

First post time for a nine-race card on New Year’s Eve is at 12:30 p.m. The Pick Six, which begins with race four, has an approximate post time of 2 p.m. PDT.