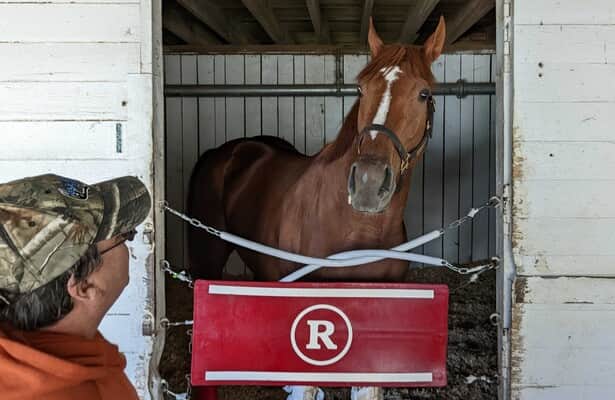 Quick question. What was Rich Strike’s most impressive race?

Not-so-quick pause. Take away the trappings of the Kentucky Derby, of the 80-1 odds that made Rich Strike the second longest shot in the race’s pari-mutuel history to win it.

“That’s a good question,” trainer Eric Reed said this week at Churchill Downs, where he has been preparing his growing colt for Saturday’s Grade 2, $500,000 Lukas Classic.

Reed was asked to take away the exclamation points and life-changing circumstances and euphoria of May 7. Just weigh the merits of that race against those of Aug. 27, when Rich Strike finished fourth in the Travers (G1), missing second by just a nose and a neck.

Reed was not biting right away, even with the 105 Beyer Speed Figure from Daily Racing Form that day at Saratoga. That was four points higher than “Ritchie” earned the first Saturday in May.

“I think the most impressive race will always be the Derby just by the way he accelerated the final quarter,” Reed said on Horse Racing Nation’s Ron Flatter Racing Pod. “But to me his best race was probably the Travers. Had he cornered better at the top of the stretch, I think he’s second, beaten two lengths, rather than fourth, beaten 4 1/2 lengths.”

The Travers performance made a point of legitimacy for Rich Strike. He might not have won over all his critics who believed his only graded-stakes victory was dependent on a suicidal, early pace. But there was no disputing the fact that that Beyer remained tied for fourth best this year by a route-going, main-track 3-year-old. Only Travers winner Epicenter, Dwyer (G3) victor Charge It and Pennsylvania Derby (G1) winner Taiba have had better numbers.

What was seared in Reed’s mind from August was the sight of his unlikely Derby winner with no horses to his outside. If there is anything that gives Rich Strike comfort in a race, Reed said, it is seeing rivals out of his right eye.

“He found himself in the middle of the track again with nobody to the outside,” he said. “But in the 10 weeks from the Belmont, he had matured enough to where he kept on trying. Arguably he had run up to third turning for home, and he just didn’t corner coming off the turn. He was really running too hard.”

But another pause is in order here. Go back to the Belmont Stakes, where Rich Strike arrived after skipping the Preakness. Carrying odds of 4-1, he never contended on his way to a sixth-place finish that saw him beat only two other horses at a 1 1/2-mile distance that should have been kind to his deep-closing style.

Reed still rues the strategy he gave jockey Sonny León that day, sometimes to the point of self-flagellation. Instead of asking for a ground-saving ride building to a closing kick against a softer pace, Reed asked León to go wide in hopes of getting a clear run past the other seven starters.

“Sonny tried to drift him out like I asked him, and immediately (Rich Strike’s) head cocked to the right,” Reed said. “He started trying to pull him to the inside; Ritchie wanted where he normally is. And Sonny was doing what I told him. From the middle of the first turn ’til almost the end of the backstretch, it was basically a tug of war. It was, ‘You’re going to stay here,’ and Ritchie says, ‘No, I’m going to go here.’”

Turning into the 366-yard homestretch that is the shortest of the three Triple Crown races, Rich Strike found himself running five wide under right-handed urging from León. At that point, Mo Donegal was an uncatchable 9 3/4 lengths down the track en route to victory.

“He’d never not had a horse to his right,” Reed said. “You know, he’s a pretty aggressive horse. Really, all he wanted to do was lay on those horses. He was very frustrated. He wasn’t happy, and the race was a disaster. The horse came back to the barn upset. He was not himself. I was really upset. I knew in the first turn I’d made a bad decision.”

Reed may be his own worst critic, but he also knows how to wear success. That would be modestly. Continuing to operate his Mercury Equine Center in Lexington, Ky., he got up at 3 a.m. each day this week to make the hour-and-change drive to Churchill Downs and watch exercise rider Gabriel Lagunes gallop Rich Strike past the twin spires at 5:30 every morning since Tuesday before driving back at sunrise.

“He’s walking home like a pro,” Reed said after watching one of those spins around the main track. “He’s stayed on all four legs walking off instead of on the back legs.”

Rich Strike’s affinity for Churchill Downs has been evidenced by his 2-for-2 record racing on the track, including a 17-length, maiden-breaking victory last September. That was when Reed famously put in the $30,000 claim that landed the Keen Ice colt with his longtime friend, owner Rick Dawson.

The 411-yard homestretch especially suits Rich Strike’s come-from-behind style. Reed hoped it would be a difference maker Saturday, when the Lukas Classic is run at 1 1/8 miles, a furlong shorter than the Derby.

“The long stretch helps me with that part,” he said. “I think a mile-and-an-eighth is fine. The problem is he’s in there with Hot Rod Charlie and a couple other really, really solid, old horses. It’s his first chance to go against those. Basically he’s going from the college to the NFL, and it’s his first game. He’s not picked out an easy group to run his first game against, but that’s just the way the schedule has lined up for us.”

Hot Rod Charlie, a frontrunner whose Grade 1 win came in last year’s Pennsylvania Derby, was made the 8-5 favorite on the morning line. Art Collector, who won the 2021 Woodward (G1), is another frontrunner who was given estimated odds of 2-1. Happy Saver, the 2020 Jockey Club Gold Cup (G1) victor who moves from mid-pack, was installed at 5-2.

Rich Strike, the only 3-year-old in the six-horse field, got post 4 and odds of 6-1 to win this race that could be a springboard to the Breeders’ Cup Classic. Reed warned, though, that a less-than-standout performance probably would mean skipping the $6 million race Nov. 5 at Keeneland and going, instead, to the Clark Stakes (G1) on Nov. 25 at Churchill Downs.

“I know he’s caught up a lot from where he was in May,” said Reed, who added Rich Strike stands a little more than 16 hands tall and weighs about 1,200 pounds. “He’ll run well with these horses. I don’t know if we’re up to the task of beating them the first try, but it wouldn’t surprise me if he did. It’s not like he can’t. But it’s a tall order.”

With the National Weather Service forecasting a sunny, breezy, 72-degree day, the Lukas Classic was carded for 5:26 p.m. EDT, the 10th of 11 races Saturday at Churchill Downs.