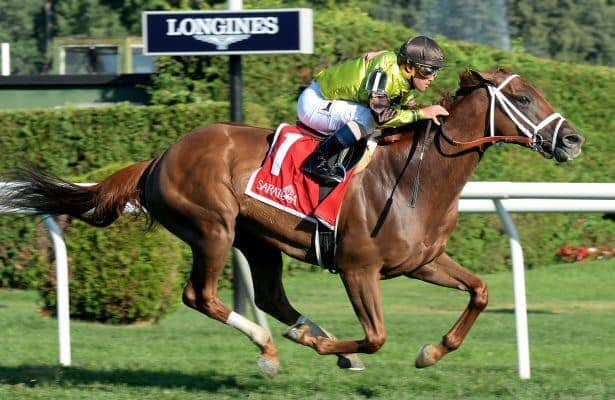 Twin Creeks Racing Stables' Red Rifle capitalized on a dream trip, riding the rail and extending away in the stretch and win the Grade 2, $250,000 Bowling Green on the turf Saturday at Saratoga Race Course.

Leaving the gate at odds of 6-1 with Javier Castellano in the irons, Red Rifle broke sharply from the one hole and was comfortably placed mid-pack tracking pacesetter Iron Power, who led the field through fractions of 25.15 seconds for the opening quarter-mile and 49.79 for the half.

At the quarter pole, Iron Power relinquished his lead to War Dancer and Imagining with Red Rifle engaging the pair as the three turned for home. In the stretch, Red Rifle split horses and drew off to win by 2 ½  lengths, completing the 1 3/8 miles in 2:13.69 on a firm inner turf course.

"Beautiful trip. Perfect trip," said Castellano.  "I was able to take advantage all the way inside on the rail. In a long distance, on the grass, the most important thing is to save all the ground, and that's exactly what I did. He did it very professionally today, and I'm very satisfied with the way he did it."

Returning $15.40 for a $2 win wager, the victory gave the 5-year-old son of Giant's Causeway his third graded stakes win, each coming on a different surface. As a 4-year-old he won the Grade 2 Hawthorne Gold Cup on dirt, and he captured the Grade 3 Dominion Day Stakes July 1 over Woodbine Racetrack's synthetic surface in his previous start. The win increased his lifetime earnings to $696,306.

"He's now won big races on three different surfaces," said winning trainer Todd Pletcher. "He's just a throwback kind of horse; he's hardy, he's tough. I always felt, prior to this year, that he's a horse, when he gets things his way, he's very dangerous. We've kind of stumbled on to a new dimension and decided that, for a race like this, there looked like plenty of pace so we tried to save ground, take advantage of the one hole through three turns. He relaxed very kindly and rated nicely. It was a super ride and he delivered a big performance."