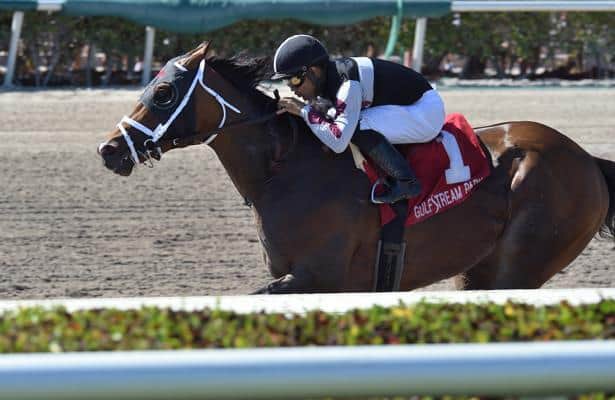 Sagamore Farm’s multiple stakes winner Recruiting Ready took the lead from Quixote at the top of the stretch and drew off to a convincing 3 ¼-length victory in Saturday’s $100,000 Gulfstream Park Sprint (G3).

The 41st running of the Gulfstream Park Sprint for 4-year-olds and up was the third of nine graded-stakes worth $1.65 million in purses on a blockbuster 14-race program topped by the Fountain of Youth (G2) for 3-year-olds.

It was the first victory in six career tries against graded company for 4-year-old Recruiting Ready, who completed six furlongs in 1:09.53 over a fast main track for trainer Stanley Hough. It was also the second graded-stakes win of the afternoon for jockey Luis Saez, who previously captured the $150,000 Palm Beach (G3) with A Thread of Blue.

Breaking a step slow from the rail, Recruiting Ready settled in third as 99-1 long shot My Chinamundo ran the opening quarter-mile in 22.56 seconds pressed by Quixote, who kept Recruiting Ready boxed in along the inside. Saez tipped the 1-2 favorite to the outside leaving the backstretch, ranging up on Quixote after a half in 45.26.

Saez set Recruiting Ready down for a drive once straightened for home and was able to pull away from a game Quixote, come-from-behind winner of the Sunshine Millions Sprint in his previous start, through the lane. Recruiting Ready now owns seven wins, four in stakes, from 17 career starts.

“It was a little scary in the beginning when we didn’t make the lead,” Hough said. “I think he’s getting better with age. Some problems are behind him and I hope he finishes this year good. After today, [Oaklawn Park] is an option heading north, but nothing is really set.”

Later Saturday, Hough will saddle undefeated Global Campaign for his stakes debut in the Fountain of Youth. Sagamore Farm and WinStar Farm’s Global Campaign won his first two starts, both this year over Gulfstream’s main track, most recently an optimal claiming allowance Feb. 9.

“It worked out great he got a two-turn race, so there’s a lot of questions he’ll have to answer and he’ll have to do that today,” Hough said. “The only reason we did that is because he seemed to come out of his races well, so we probably could have found a better spot, but we decided to give him a try today. Today’s a great day.”