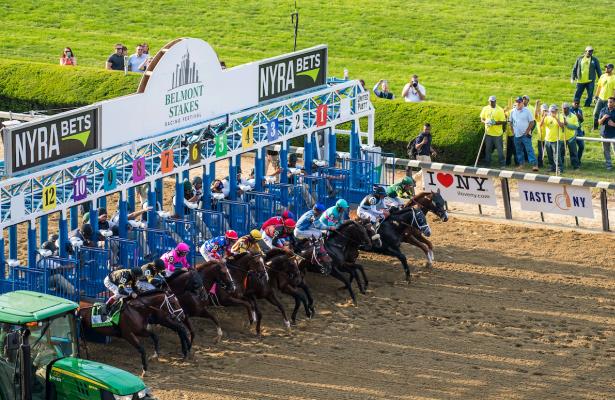 "She showed that she had some ability early on. Her last race really showed a different dimension with her being able to close there at the end," DeVaux said.

Reagan's Edge holds sentimental value to her connections as she is named after Ingordo's 9-year-old daughter.

"It's her horse in theory, but she doesn't pay the bills," DeVaux said. "My husband really wanted her to win first out so we took her to Indiana and she ran great. It's a big step up for her, but she's proved that she at least wants the opportunity. It's really nice for the horse and that we have her as a part of the family."

Bred in Kentucky by Mauk One Farm, Reagan's Edge is the fourth foal out of the unraced Sunday Break broodmare Dayienu, whose other three progeny were winners. Reagan's Edge was purchased for $77,000 from the Ocala Breeders' Sales Company's 2-Year-Olds in Training Sale in April 2019.

Frank Fletcher Racing Operations' Frank's Rockette brings the class for Hall of Fame trainer Bill Mott. Favored in all seven of her career starts, the swift daughter of Into Mischief has never finished worse than second with her only stakes victory being a seven-length triumph in the Any Limit on February 22 at Gulfstream Park in her 2020 debut.

Twice placed against graded stakes company in last year's Adirondack (G2) at Saratoga and the Frizette (G1) at Belmont Park, Frank's Rockette arrives off a victory against optional claiming company on May 25 at Churchill Downs, where she led a torrid pace but maintained her advantage throughout and drew off to a 3 ½ length victory.

Frank's Rockette has trained forwardly for Mott since her last effort with her most recent work being a half-mile drill in 46.80 seconds over the Belmont main track on June 21 - the fastest of 45 recorded works at the distance.

Hall of Fame jockey John Velazquez, who has piloted Frank's Rockette twice, will return to the irons from post 1.

Trainer George Weaver has enjoyed a successful Belmont meet with four winners from 12 starters and will attempt to continue such winning ways when saddling R.A. Hill Stable and Black Type Thoroughbreds' Up in Smoke.

The gray or roan daughter of The Big Beast is unbeaten going one turn with her only loss being a distant fourth in Gulfstream Park's Hollywood Wildcat going the two turn mile-and-a-sixteenth. She arrives off a victory in the Game Face on June 6 at the South Florida oval.

Leading rider Irad Ortiz, Jr. seeks his sixth stakes win of the meet aboard Up In Smoke from post 2.

Trainer Chad Brown, who saddled 2019 Victory Ride winner Royal Charlotte, sends out Center Aisle, who will try to make amends after a distant fifth as the heavy favorite in a Churchill Downs first-level allowance event on May 22.

Jockey Joel Rosario will go for his third triumph in the Victory Ride, piloting Center Aisle from post 4.

Rounding out the field is Miss Peppina, who is owned by trainer Gary Gullo in partnership with Bob Petersons Stables, West Point Thoroughbreds and F Bellavia.

Following a win on debut last July at Belmont, the chestnut daughter of Bayern went on to finish fourth to Perfect Alibi in the Adirondack (G1) and Spinaway (G1) at Saratoga. Gullo tried her on turf in her most recent effort, where she was a distant 10th in her 2020 debut.

Jockey Manny Franco seeks a third stakes victory this meet when piloting Miss Peppina for the first time from post 5.