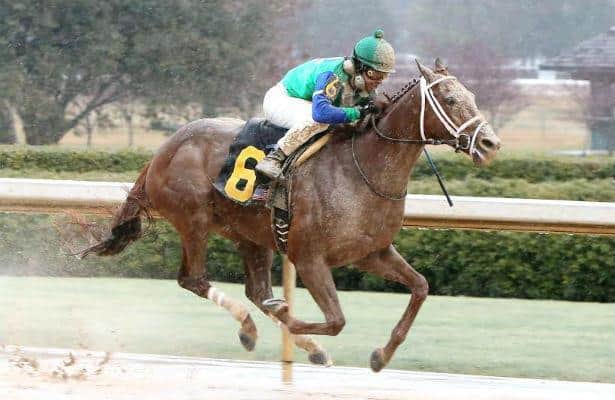 “The jock felt confident and didn’t have to use him too much,” Moquett said. “It all worked out good.”

Moquett was using the race as a prep for the $350,000 Razorback Handicap (G3) March 19 at Oaklawn. The Razorback is the final major local prep for the $750,000 Oaklawn Handicap (G2) April 16, which is Far Right’s major spring objective.

The Notional ridgling is co-owned by Harry Rosenblum and Robert LaPenta.

Call Pat worked a half-mile in :49.20 Saturday morning at Oaklawn in preparation for the $350,000 Azeri Stakes (G2) March 19. Call Pat won the $100,000 Bayakoa Stakes (G3) Feb. 14 at Oaklawn in her last start. … Multiple graded stakes winner Sarah Sis worked a half-mile in :49.80 just after the track opened Saturday morning at Oaklawn for trainer Ingrid Mason. Sarah Sis is under consideration for the Azeri and the $200,000 Inside Information Stakes (G2) March 19 at Gulfstream Park. Mason said Friday morning that she was leaning toward the Inside Information. … Subtle Indian worked a half-mile in :49.20 Saturday morning at Oaklawn for trainer Robertino Diodoro in preparation for next Saturday’s $100,000 Hot Springs Stakes for older sprinters. … Trainer Gerald Brooks, a recent arrival at Oaklawn, has his first scheduled starter of the meeting in Saturday’s fifth race with Ore Pass. Brooks, who is based in the Mid-Atlantic region, set career highs for victories (53) and purse earnings ($1,031,744) last year, according to Equibase, racing’s official data gathering organization. Another recent training arrival is Garry Simms. … The now-retired The Big Beast, an allowance winner in his 2015 debut at Oaklawn, was named Maryland-bred Horse of the Year in an annual poll conducted by the Maryland Breeders Association. Following his Oaklawn victory, The Big Beast finished second in the $350,000 Vanderbilt Handicap (G1) and $700,000 Forego Stakes (G1) last summer at Saratoga. The Big Beast is now standing at Ocala Stud in Florida.