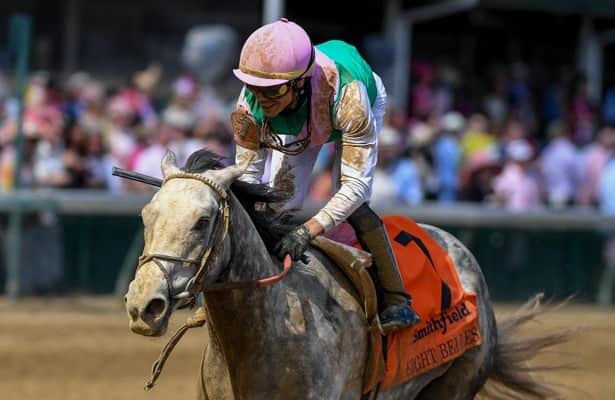 Sophomore filly sprinters will enjoy the spotlight Saturday at Keeneland.

Grade 2 heroine Obligatory is the 3-1 morning-line favorite in an 11-horse field for the $250,000 Raven Run Stakes (G2) going seven furlongs on the dirt. Post time from the Lexington, Ky., oval is 5:16 p.m. EDT, with TVG broadcasting the day’s card.

Obligatory made the grade on the Kentucky Oaks undercard in April for trainer Bill Mott. She ran last of 12 in the early stages of the Eight Belles Stakes (G2) but circled seven-wide into the Churchill Downs stretch and closed to win at 17-1 odds.

In three starts since the Eight Belles, Obligatory’s results include runner-up finishes at Belmont Park in the Acorn Stakes (G1) and Parx in the Cotillion Stakes (G1). Jockey Florent Geroux takes over the mount Saturday on the Curlin filly, a Juddmonte homebred who will break from the far outside post.

Mott also conditions Caramel Swirl (7-2), a Saratoga allowance winner looking for a stakes breakthrough. She settled for fourth last out as a 7-10 favorite in the Charles Town Oaks (G3).

Souper Sensational won Belmont’s Victory Ride Stakes (G3) in July for trainer Mark Casse, then was second at Saratoga in the Test Stakes (G1) and Prioress Stakes (G1). The latter of those second-place finishes came behind Cilla (8-1), who runs Saturday for trainer Brett Brinkman.

Here is a look at the field for the 2021 Raven Run Stakes (trainer and jockey in parentheses) with morning-line odds:

Here is a look at other notable stakes races taking place Saturday across North America. Post times are EDT.

Our Secret Agent (8-5) runs here trying to make the grade in her sixth try. Trained by Mark Casse, she was second in the local Seaway Stakes (G3) in August but finished last of five one start later in the Canadian Stakes (G2). Jockey Kazushi Kimura gets the call on the 4-year-old Secret Circle filly. Kevin Attard conditions Amalfi Coast (9-5), who is a three-time graded stakes heroine, including her Ontario Fashion Stakes (G3) score earlier this month.

Soup and Sandwich (3-1) returns for his first start since the 2021 Kentucky Derby. The Into Mischief colt prompted pacesetter and eventual winner Medina Spirit early in the Derby but suffered a displaced soft palate and was eased. Jockey Tyler Gaffalione retains the mount on the Florida Derby (G1) runner-up for Casse. Kelly Breen trains Pickin’ Time (7-2), a Grade 3 winner who was best of the rest behind likely Breeders’ Cup Sprint favorite Jackie’s Warrior last out at Parx in the Gallant Bob Stakes (G2).

Tappin Cat (6-5) enters this event on a three-race winning streak, including a victory in a stakes at Delaware Park in his last start. The Tritap gelding ran in this event two years ago, checking in third. Gary Capuano trains the 5-year-old, who will have jockey Jevian Toledo aboard Saturday. Cordmaker (1-1) has twice run third in the Pimlico Special Stakes (G3) and is an also-eligible for trainer Rodney Jenkins.

The Raven Run is scheduled as the ninth race on Saturday’s 10-race program with a 5:16 p.m. EDT post time. First post Saturday is 1 p.m.

Trained by Brett Brinkman, Cilla returned Tuesday afternoon to Keeneland, where she finished sixth as a 62-1 shot in the Beaumont (G3). Since then, the Louisiana-bred daughter of California Chrome has won three consecutive races highlighted by the Prioress victory.

Tyler Gaffalione will have the mount Saturday and break from post position seven.

Souper Sensational, winner of the Victory Ride (G3) at Belmont Park who has placed in three graded stakes, was runner-up in the Test (G1) prior to her run in the Prioress. Trained by Mark Casse, Souper Sensational will exit post position three and be ridden by Ricardo Santana Jr.

Another Grade 2 winner in the field is Juddmonte’s homebred Obligatory.

Trained by Bill Mott, Obligatory won the Eight Belles (G2) on April 30 at Churchill Downs going seven furlongs. Runner-up in the Cotillion Stakes (G1) at Parx in her most recent start, Obligatory drew post 13 and will be ridden by Florent Geroux.