Odds & analysis: 1 horse stands out in the Raven Run 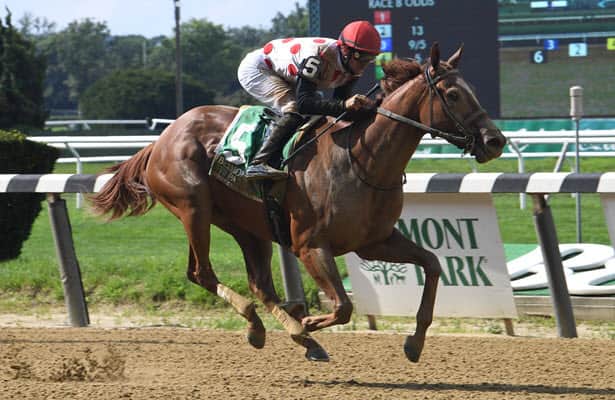 The Grade 2, $250,000 Raven Run for 3-year-old fillies drew a large field of 13 that will race seven furlongs at Keeneland on Saturday.

Here is a full field analysis for the Raven Run with odds provided by the Horse Racing Nation staff. The event is carded as race 9 out of 10 with post time scheduled for 5:16 p.m. EDT.

1. Shalimar Gardens (20-1 – Uncle Mo – Horatio DePaz / Rafael Bajarano – 3: 1-1-1 - $78,500) This lightly raced filly began her career in May and caught wet tracks in her first two starts in New York. Following a two-month layoff, she broke her maiden at Belmont Park last month with a handy almost 12 length front-end victory going a one-turn mile as the odds-on favorite. The NY-bred will have to ship down to Kentucky to face graded stakes company. Toss.

2. Joy’s Rocket (8-1 – Anthony’s Cross – Steve Asmussen / Julien Leparoux – 8: 4-1-1 - $253,444) Joy’s Rocket won her first career start for Steve Asmussen at Churchill Downs as a 2-year-old and then shipped to Woodbine to win her second race on the Tapeta surface. She ended her juvenile campaign with a pair of front running victories including one on the Breeders’ Cup undercard at Keeneland. Joy’s Rocket was off for eight months, returning in a turf sprint stake at Kentucky Downs last month. She did run well in a prior race on the grass last year, although she was not in contention in that return to the races. On her best, she would a serious contender in this field. Live long shot.

3. Souper Sensational (7-2 – Curlin – Mark Casse / Ricardo Santana, Jr. – 9: 3-3-1 - $397,203) Like the other Mark Casse runner in this field, Souper Sensational began her career with two victories at Woodbine. Both of those wins were at the seven-furlong distance with a stakes score while pressing the pace. She then moved out of Canada to face graded stakes company after various tracks and distances. In seven starts as a 3-year-old, Souper Sensational won the Victory Ride (G3) at Belmont Park in July and then ran second twice in the Test (G1) and the Prioress (G2). No doubt that she is best while sprinting. Win contender.

4. Minute Waltz (20-1 – Nyquist – Philip Bauer / Martin Garcia – 10: 1-3-4 - $128,617) Minute Waltz shows only one win which came in a maiden in her debut a year ago at Churchill Downs going six furlongs. Since then, she added seven board hitting finishes which were mostly in allowance races. In August, Minute Waltz was third in Audubon Oaks at Ellis Park going today’s seven-furlong distance. Toss.

5. Strong Silent (15-1 – Wicked Strong – Dale Romans / Corey Lanerie – 3: 2-1-0 - $214,220) Strong Silent is a lightly raced filly with wins in her last two starts for Dale Romans. She was second in her debut at Ellis Park in July and then a month later broke her maiden while setting the pace. Last month, the daughter of Wicked Strong added an allowance win by less than a length against a small field at Churchill. Toss.

6. Feeling Mischief (20-1 – Into Mischief – Michael Campbell / Mitchell Murrell – 9: 2-1-3 - $90,347) This daughter of Into Mischief began her career as a 2-year-old with a win at Colonial Downs by eight lengths on the main track. In her third start at Tampa Bay Downs, she won a stakes race will pressing the pace. Since then she was a consistent filly while racing against listed stakes company and hitting the board a few times. Toss.

7. Cilla (3-1 – California Chrome – Brett Brinkman / Tyler Gaffalione – 10: 5-0-2 - $326,000) Cilla is riding a three-race streak of victories in stakes races including the Prioress (G2) at Saratoga where she sat a stalking trip to win at odds of 10-1. Those kind of odds will not be available on the Louisiana-bred now. She was bred and is trained by the Delta Downs horseman Brett Brinkman. Win contender.

8. Caramel Swirl (15-1 – Union Rags – Bill Mott / Junior Alvarado – 8: 2-3-1 - $167,300) From his debut a year ago at Belmont Park, Caramel Swirl was well-supported at the betting windows including six times as the favorite. She broke her maiden in her sixth try while going seven-furlongs at Keeneland during the spring meeting. Her other victory was at Saratoga in a first-level allowance also going today’s distance. In two tries in graded stakes she was not a factor at the finish and both times she raced without Lasix. In her two wins, the Union Rags filly used that race day medication. Use underneath.

9. Zainalarab (12-1 – War Front – Chad Brown / John Velazquez– 3: 2-1-0 - $114,900) This Chad Brown runner was a first out winner as a 2-year-old at Belmont in the fall as an even-money favorite. She was given the summer off and came back to run second in an allowance at Churchill in April. Zainalarab got an allowance victory at Saratoga in August by almost three lengths. Right now, Brown is red-hot while winning races all over the country. She will be a good price for a Chad Brown runner. Use underneath.

10. Someone Said So (10-1 – Texas Red – Coty Rosin / Adam Beschizza – 10: 3-2-1 - $118,627) This filly has plenty of experience with nine starts this year. She spent the summer at Canterbury Park in Minnesota where she won two OC allowances in a row. At the end of September, Someone Said So was a surprise place horse in the Dogwood (G3) at Churchill behind Caribbean Caper but well ahead of the others after pressing the pace. Toss.

11. Miss Speedy (6-1 – Souper Speedy – Mark Casse / Brian Hernandez, Jr. – 4: 3-0-0 - $138,473) Miss Speedy is the winner of 3 out of 4 career starts that were all run at Woodbine. In July, she rallied from last in her debut in a $40,000 maiden claimer to win by almost four lengths going 5 ½ furlongs. Next time out, Miss Speedy won an 8.5 furlong optional claiming allowance by four while racing on the front end. Her only loss came in her stakes debut which was also run at that two-turn distance. Last month, she won the Duchess going seven furlongs. The Canadian-bred will make her first start away from Woodbine in this Grade 2. Win contender.

12. Just Read It (15-1 – Constitution – Ray Handal / Gerardo Corrales – 4: 2-0-0 - $104,450) Just Read It has been away from the races since March when she won the Cicada by a head at Aqueduct. She broke her maiden for trainer Ray Handal by more than six lengths in her second start which also was at the Big A. Her only bad race was on the synthetic track at Turfway Park in February. This is a tough spot to return from a long layoff, although she showed some talent during the winter. Toss.

13. Obligatory (9-2 – Curlin – Bill Mott / Florent Geroux – 7: 2-2-0 - $528,780) Since her maiden special weight victory in her second start, the Bill Mott filly ran exclusively in graded stakes where she has a trio of top three finishes which includes the Eight Belles (G2) at Churchill Downs in April. Obligatory then stretched to a one-turn mile in the Acorn (G1) where she closed well to finish second. Most recently, the daughter of Curlin ran second at every call in the Cotillion (G1). She is the leading money winner in the field and appears to have a class edge on the other fillies. The cutback in distance seems ideal. Top choice.

Obligatory gets a bit of class relief in this field with a two second-place finishes in Grade 1 races this year. She was a game second in the Cotillion going two-turns against a tough field and the cutback to seven furlongs should be to her liking. She will have to overcome the outside post-position draw, but to her credit she won the Eight Belles going today’s distance when she had to rally from last in a 12-horse field.