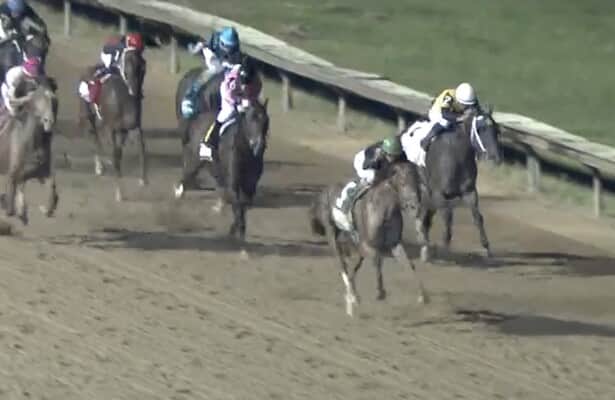 A Grade 1 winner at age 2, Rattle N Roll became a three-time stakes victor Saturday night when he closed down the middle of the track to win the $150,000 St. Louis Derby at Fairmount Park.

Sent off the 7-5 favorite, the Connect colt trained by Kenny McPeek conceded as much as 7 3/4 lengths of ground early in the race. From eighth place in the field of nine, jockey Brian Hernandez Jr. circled the field going five wide on the backstretch.

When Rattle N Roll turned for home, he was equidistant between the two rails. He took the lead with a furlong to go and won by 4 1/2 lengths, leaving no doubt he was much the best in the 1 1/16-mile race.

War Campaign (5-1) was 7 1/4 lengths off the early pace and closed to finish second. Brigadier General (9-1) was in mid-pack throughout the race and settled for third, six lengths behind the winner. Big Blue Line (14-1) was another length back in fourth.

Congrats to the connections!

2 more races to go from FanDuel Horse Racing, tune in to TVG now for live coverage with @scotttvg and get involved at https://t.co/nBYFHj6ufh! pic.twitter.com/8n0fyPo1DQ

McPeek said the Oklahoma Derby on Sept. 25 at Remington Park would be the likely next stop for Rattle N Roll.

Ginny and Leo Mackin and their family, who do business as Lucky Seven Stable, own Rattle N Roll. McPeek bought the Kentucky-bred colt as a yearling for $210,000 at a Keeneland sale in September 2020.

Last year Rattle N Roll won the Breeders’ Futurity (G1) at Keeneland, but he was defeated in his first six starts in 2022, including a sixth-place finish in the Blue Grass (G1) in a late bid to make the Kentucky Derby.

After a third-place finish in the Matt Winn (G3) in June at Churchill Downs, Rattle N Roll won the black-type American Derby last month over the same track. A week later he clipped heels coming out of the gate and was a non-factor when finishing seventh in the Indiana Derby (G3).