Ransom the Moon ready for stakes debut in Kona Gold 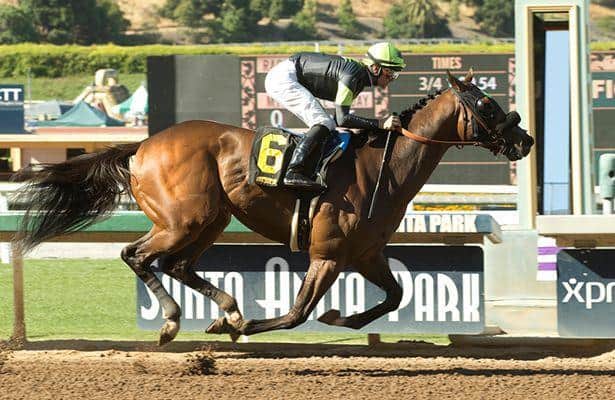 Ransom the Moon makes his stakes debut next Saturday in the Grade II, $200,000 Kona Gold Stakes for three-year-olds and up at 6 ½ furlongs on the main track.

A recent acquisition by Agave Racing Stable and Jeffry Wilke, the Canadian-bred son of Malibu Moon won his first start at Santa Anita in an overnight race April 30, scoring by 4 ¼ lengths under Flavien Prat at 6-1 for trainer Phil D’Amato.

“He was a private purchase from (breeder) Sam-Son Farm (in Milton, Ontario, Canada),” D’Amato said of the five-year-old full horse, whose previous 12 races had been at Woodbine. “He’s trained really well on the dirt, although he never ran on it in Canada (either turf or synthetic at Woodbine). Hopefully, he’ll take another step forward.”

Prat retains the mount in the Kona Gold, which also is likely to attract Cat Burglar, Eastwood, Kentuckian, Lord Simba and Moe Candy.

Meanwhile, Santa Anita Handicap runner-up Midnight Storm, a prime contender for the Grade I, $500,000 Gold Cup at Santa Anita May 27, “probably will breeze Tuesday” for the mile and a quarter race, D’Amato said.

TRUMAN FINDS THE OWNER WHO KEEPS ON GIVING

Eddie Truman was somewhat nonplussed when Argosy Fleet won his debut race Friday at Santa Anita, even though he was second choice in the field of seven two-year-olds.

A son of Mineshaft owned by Peter Redekop, Argosy Fleet prompted the pace, then held off all challengers in the stretch drive to win by a head under Kent Desormeaux.

“I expected him to run a good race, but as far as winning, I don’t know, because I think he’s a two-turn horse, but he was ready to run,” said the 70-year-old Truman Saturday morning.

“He’s such a kind horse. He’s amazing. I don’t think I’ve ever had a two-year-old that’s been so smart and kind, and I’ve trained for 49 years.”

The last three of those years have been for Vancouver, Canada-based owner Peter Redekop, who purchased Argosy Fleet for $250,000 at the Ocala Sales in March.

“Thank goodness for Peter. He saved me,” Truman said. “When do I ever get a horse someone paid $250,000 for? He picks out good horses and keeps sending them to me.”

PEREIRA RISING TO THE TOP AT SANTA ANITA

Tiago Pereira continues to make an impact at Santa Anita with both horsemen and horse players, winning races with favorites and longshots alike, making his mark yet still flying below the radar.

Through 16 days in the Spring portion of the current meet, the 40-year-old native of Brazil was tied for fourth in the standings with eight wins.

He won back-to-back races Thursday, the fifth on $17.60 outsider K Thirty Eight for trainer Karen Headley and the sixth on $5.60 second choice Back Beauty for Matt Chew.

Pereira and his unobtrusive but effective agent, Patty Sterling, understandably are seeking greater worlds to conquer.

“I want to do better and I’m working hard to do that,” Pereira said through interpreter Alex Procel, a man of many hats in the world of racing.

“I want to be among the leading riders, in the top group, not just the top 10 but the top three. If I get to ride the better horses, I will have a better chance to get there.

“I’m riding well, but it’s the good horses that get you to the top.”

Pereira came to the United States three years ago at the behest of trainer A.C. Avila.

“My family’s background in Brazil was not in racing,” Pereira said. “None is in the horse business.”

At the moment, it appears, one is enough.

FINISH LINES: Santa Anita Oaks winner Paradise Woods, who disappointed in last Friday’s Kentucky Oaks at Churchill Downs, is back with Richard Mandella at Santa Anita. “We gave her a bone scan and it was clean,” the Hall of Fame trainer said. “We’ll give her a couple weeks to freshen, then start back and decide what to do next.” . . . Defending Gamely Stakes winner Illuminate worked five furlongs on Santa Anita’s main track Saturday in 1:03.20 for this year’s edition of the Grade I race at 1 1/8 miles on turf May 27. Trainer Michael McCarthy said she went “really good. I’m happy.” . . . Term of Art, who leaves Tuesday for the Preakness Stakes a week from today, worked six furlongs for Doug O’Neill in 1:13.80 . . . Richard Baltas, tied for the training lead at 11 with Phil D’Amato and winning at a 30 percent clip (11 of 37), plans to pass the Kona Gold with comebacking claiming horse turned Grade I stakes winner Big Macher in favor of the $100,000 Thor’s Echo Handicap at six furlongs on June 11 . . . Probable for next Saturday’s $100,000 Crystal Water Stakes for California-bred or sired horses at one mile on turf: G.G. Ryder, Indygo Holiday, Pee Wee Reese, Smokey Image, Temple Keys and What a View.