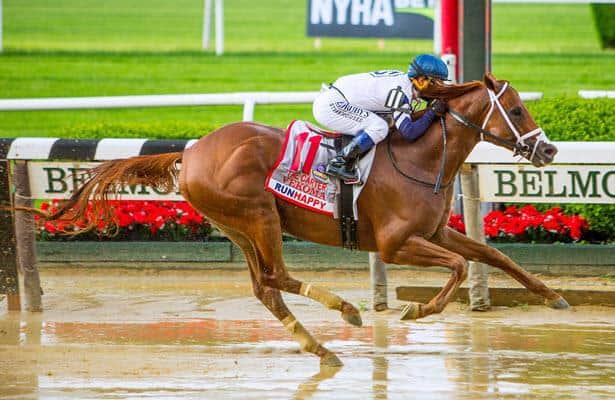 With the days counting down until the Nov. 6-7 Breeders' Cup at Keeneland Race Course, it is never too early for handicappers to begin preparations for what could prove a lucrative two days of championship racing.

Starting here with the Breeders' Cup Sprint, Horse Racing Nation will try to aid in those efforts with a close look at the best prep races in each of the major divisions. This will include a review, full video replay and winning speed figures — both Brisnet and Beyer.

The $2 million Breeders' Cup Sprint going six furlongs on the main track is set for Saturday, Nov. 7. In the 37th edition of the Sprint, Vekoma — a dual Grade 1 winner around one turn this season for trainer George Weaver — figures to be a clear-cut favorite in his bid to sew up the Eclipse Award as champion sprinter. The son of Candy Ride also holds an automatic bid for the Dirt Mile, but the two-turn configuration of that race has connections leaning toward the shorter Sprint.

If a championship is to be had for Vekoma, he likely will need to get past such accomplished rivals as Yaupon, C Z Rocket, Firenze Fire, Diamond Oops, Complexity, Flagstaff and Collusion Illusion. You can see them all in action in the videos below.

Making just his second start since last year's Kentucky Derby, Vekoma pressed the pace set by American Anthem and drew off in the stretch for a 7 1/4-length rout on a sloppy track. He would come back to win the July 4 Met Mile in front-running fashion to improve to 3-for-3 this season.

Vekoma certainly has been impressive, but it remains a question whether three-quarters is his best distance and things haven't exactly gone without a hitch since the Met Mile. A foot abscess shortly after the race forced Vekoma to miss training and a potential final tune-up in the Vosburgh.

Network Effect has not worked since also finishing second in the Met Mile, and American Anthem is not under consideration for the Sprint.

After two sharp wins earlier in the summer for Hall of Famer Steve Asmussen, Yaupon stepped up to the graded stakes ranks and promptly led at every point of call while cruising to a two-length victory against fellow 3-year-olds. He would come back to win the Chick Lang (G3), also against sophomores, in similarly impressive fashion at Pimlico on Oct 1.

The speed ratings for Yaupon put him squarely in the mix for the Sprint. But he has yet to be tested by older stakes runners, and the waters will be plenty deeper in this spot. In the 36 previous runnings of the Sprint, 3-year-olds have won nine times, with the two most recent being Defrong in 2016 at Santa Anita and Runhappy at Keeneland in 2015.

Basin and Premier Star are not under consideration for the Sprint.

CZ Rocket has become a win machine since being claimed on behalf of trainer Peter Miller and sticking to one-turn races. This most recent triumph, by a hard-fought head over Flagstaff, was the fifth straight since C Z Rocket was red-tagged for $40,000 on April 30 at Oaklawn Park.

After edging Flagstaff by a half length in the seven-furlong Pat O'Brien (G2) at Del Mar a month earlier, C Z Rocket did similar here at Santa Anita. The 6-year-old City Zip gelding pressed outside of Flagstaff through moderate fractions and was all out in the stretch to keep the winning streak alive under Luis Saez.

Firenze Fire adores Belmont Park, and he proved it again here with a sharp 2 3/4-length win going six furlongs. The 5-year-old has two wins in five starts this season since being transferred to trainer Kelly Breen from former trainer Jason Servis, who was federally indicted on horse-doping charges.

Firenze Fire's only two sub-par efforts with Breen have been when catching a wet track in both the Carter and Forego. In 29 starts, he's never raced at Keeneland.

Funny Guy also is under consideration for the Sprint.

Sprinting on dirt for the first time this season, Diamond Oops rallied under Florent Geroux to run down 51-1 longshot Empire of Gold in deep stretch and score by 3/4 length.

Trained by Patrick Biancone, Diamond Oops also owns an automatic entry into the Turf Sprint thanks to his win in the Churchill Downs Turf Sprint (G2) on Sept. 4. It is still to be determined which race he will enter for Breeders' Cup weekend, according to connections.

Win Win Win turned in one of the most memorable performances of the season here when falling some 15 lengths back after a quarter mile in a driving rain storm and then circling the field to best Complexity by a half length.

It's tough what to make of this heat as Win Win Win was the only horse in the field to make up ground over the sloppy going. While Win Win Win has subsequently been retired, Complexity looks like a live contender for trainer Chad Brown. The 4-year-old Maclean's Music colt came back to win the Oct. 3 Kelso (G2) over Code of Honor going a one-turn mile while earning a 109 Brisnet Speed Rating.