Pegasus World Cup: See how past runnings rank vs. 2021 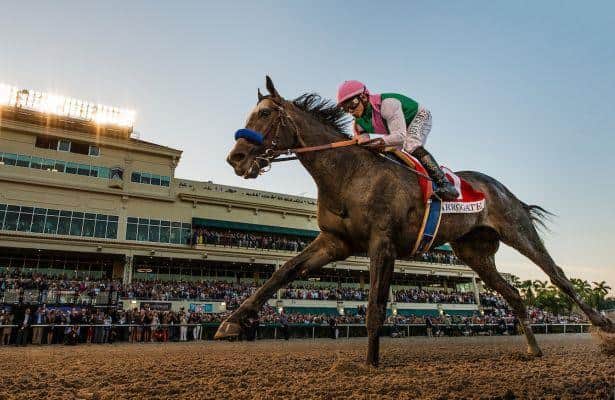 Fans were delighted when Grade 1 winners Arrogate, California Chrome, Shaman Ghost, Keen Ice and Noble Bird all lined up in the starting gate for the inaugural Pegasus World Cup in 2017 with $12 million on the line.

The 2018 edition of the race, which had a $16 million purse, made that field look mediocre.

In 2019, the purse was cut to $7 million and the field lost depth. It was very strong at the top with a pair of Breeders' Cup winners, Accelerate and City of Light, but the full field had 17 fewer graded-stakes victories than the year before.

Last year, the purse was cut to $3 million and the quality of the field diminished. It already was not quite as strong as years past before the late scratches of Omaha Beach and Spun to Run, which devastated the field. Higher Power and Seeking the Soul were the only Grade 1 winners in the field, and the winner of the race, Mucho Gusto, had not won a race at the Grade 1 or 2 level heading into the Pegasus.

The 2021 Pegasus has followed a similar pattern to last year. The prospective field initially looked strong with Tiz the Law, Charlatan, Maxfield and Mucho Gusto under consideration. They all have defected, leaving this year's Pegasus as a solid but unspectacular group.

Knicks Go and Code of Honor are two-time Grade 1 winners, while Math Wizard and True Timber each own an upset Grade 1 victory.

Below we analyze the strength of this year's Pegasus World Cup compared with past editions by looking at the combined number of graded-stakes victories for the entries heading into the race.