Ranking the Preps: Talent abounds in BC Juvenile Fillies 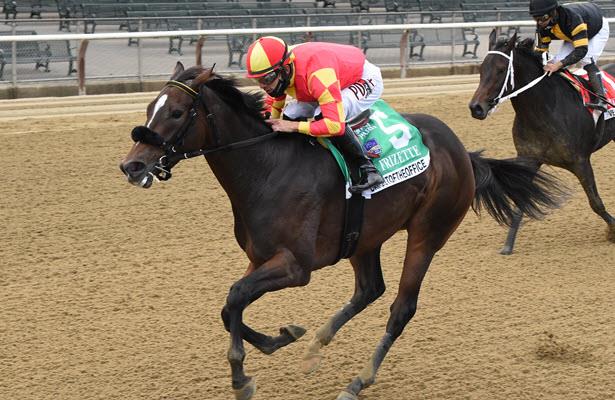 With prep season producing four Grade 1 winners — three undefeated — no shortage of quality will be on display when the gates open Nov. 6 for the $2 million Breeders' Cup Juvenile Fillies at Keeneland Race Course.

Out west, Princess Noor stepped to the head of the class for trainer Bob Baffert with three wins in a 4 1/2-week span, including the seven-furlong Del Mar Debutante (G1) and 1 1/16-mile Chandelier Stakes (G2) at Santa Anita, both of which can be viewed below. For handicappers, the task at hand will be to weigh the merits of the visually impressive efforts versus the relatively low speed ratings earned.

Dayoutoftheoffice and Simply Ravishing also both enter with perfect 3-for-3 records and a Grade 1 win on the resume. Adding depth to the proceedings is Girl Daddy, who made it 2-for-2 winning the Pocahontas (G3) at Churchill Downs, and Vequist, winner of the seven-furlong Spinaway (G1) prior to running second to Dayoutoftheoffice in the Frizette.

Dayoutoftheoffice broke a few lengths slow before moving up the backstretch to put outside pressure on the pacesetter. With Grade 1 winner Vequist stalking inside of horses on the rail, Dayoutoftheoffice seized control at the quarter pole and got the jump when accelerating to the wire to beat that rival by two lengths.

While rated as the fastest of the Breeders' Cup preps, Keeneland's mile and a sixteenth will be the first two-turn test for the daughter of Into Mischief.

Simply Ravishing stayed unbeaten for trainer Ken McPeek when allowed to get loose on the lead through moderate fractions and then running on well to win by 6 1/2 lengths. While the speed figures came back strong, it was an ideal setup for the daughter of Laoban, further enhancing the quandary of speed figure vs. trip handicapping prominent in this year's Juvenile Fillies.

Crazy Beautiful was beaten just two lengths in the Pocahontas (G2) one race prior by Girl Daddy (see below) and is possible for the Breeders' Cup.

Exiting a debut maiden win at Del Mar Aug. 22, Princess Noor — a $1.35 million auction purchase earlier this year — veered in at the break from the four hole and bumped second-choice My Girl Red, who would be eased down the backstretch.

Princess Noor raced three wide while under a hold for the opening half mile before ranging up to the leaders at the quarter pole and then putting the field away to down the stretch to win by 6 1/2 lengths while being geared down late.

Forest Caraway came back to be fourth in Saturday's six-furlong Anoakia Stakes at Santa Anita Park won by Baffert's Kalypso, who is now under consideration for the Breeders' Cup.

If Princess Noor gets high marks for her seven-furlong Grade 1 win in California, Vequist is worthy of likewise for her 9 1/2-length romp at the same distance in New York. The daughter of Kentucky Derby winner Nyquist pressed a sharp pace on the outside before taking over at the quarter pole and finding her best stride late to win going away.

When returning to be second in the Frizette, the daughter of Nyquist upped her speed rating notably with Beyer (88) and TimeForm US (109). Lady Lilly is under Breeders' Cup consideration for trainer Steve Asmussen.

Girl Daddy got a stalking outside trip down the backstretch after breaking a step slow, steadily ranged up to the leaders without urging on the turn and burst clear through the stretch for a sharp two-length win.

We will see this fast filly in the Juvenile Fillies on #FutureStarsFriday! #WAYI :tada: pic.twitter.com/sQJYRHhH9Y

Perhaps the time was slow and competition questionable, but there was still plenty to like from the winner when trying two turns for the first time.

Princess Noor was stuck down inside in tight quarters early and fell off the pace down the backstretch. Eased out for racing room entering the second turn, Princess Noor promptly took over at the quarter pole and from there it was a matter of how fast and by how many. The winning margin for the daughter of Not This Time was 8 1/4 lengths while not being asked.

Varda, also from the Baffert barn, is possible for the Breeders' Cup.