Ranking the Preps: BC Juvenile a one-horse race? 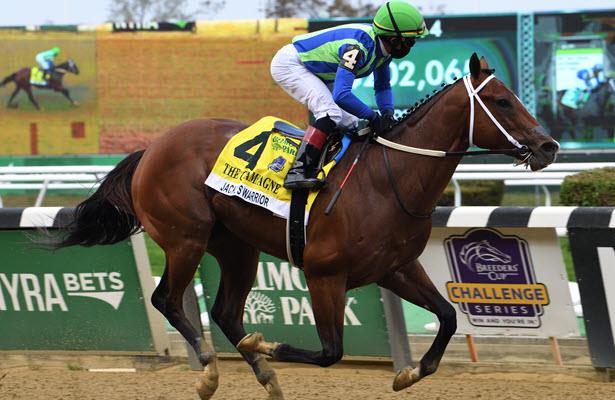 On the road to this year’s $2 million Breeders’ Cup Juvenile, a budding star emerged in Jackie’s Warrior.

A $95,000 auction purchase, Jackie’s Warrior has gone 4-for-4 to start his career while bagging Grade 1 wins in the seven-furlong Hopeful at Saratoga and most recently the one-mile Champagne at Belmont Park. Both were gate-to-wire and the speed figures, as noted in the table below, hold an edge over the prospective field for the Juvenile on Nov. 6.

The stellar campaign leaves Jackie’s Warrior as the horse to beat in the Juvenile. While still unproven around two turns, the son of Maclean’s Music is heavily favored in futures markets and tabbed as the 9/5 chalk on HRN's current line. Jackie’s Warrior would be the first Breeders' Cup Juvenile winner for Hall of Fame trainer Steve Asmussen.

Reinvestment Risk stalked outside of front-running Jackie's Warrior through solid fractions of 23.12 and 46:54 before ranging up to the throat-latch of the leader near the quarter pole. Chad Brown-trained Reinvestment Risk never got any closer. Feeling the pressure, Jackie's Warrior and Joel Rosario quickly spurted clear at the top of the stretch and cruised to the wire a 5 1/2-length winner.

Reinvestment Risk is expected to move on to the Juvenile. Midnight Bourbon, who a month earlier was second in the Iroquois outlined below, is possible for Asmussen.

The prequel to the Champagne unfolded much the same: Reinvestment Risk stalked the pace of Jackie's Warrior and proved no match for the winner when the real running began. Jackie's Warrior had opened up five lengths at the eighth pole before being geared down and crossing the wire 2 1/2 lengths in front.

Mutasaabeq came back to be an impressive winner of the Oct. 4 Bourbon Stakes (G2) on grass and is expected to run in the Breeders' Cup Juvenile Turf.

A serious threat to Jackie's Warrior emerged here when Godolphin's Essential Quality — making just his second start following a debut win sprinting six furlongs at Churchill Downs — attended the pace through six furlongs in 1:13.40 and then kicking clear at the top of the stretch to win by by 3 1/2 lengths under Luis Saez.

Maiden Keepmeinmind, who was also second on debut Sept. 2 at Churchill Downs for trainer Robertino Diodoro, is possible for the Juvenile. Super Stock for trainer Steve Asmussen is not expected to run in the Juvenile.

Dismissed at 23-1 on Kentucky Derby day, Sittin On Go was stuck behind horses and second-last under Corey Lanerie down the backstretch of this one-turn mile. Finally swung wide rounding the bend, Sittin On Go started to pick off horses approaching the quarter pole and powered home to win going away by 2 1/2 lengths.

Winning trainer Dale Romans also won this race last year with Dennis' Moment. The colt would go off favored in the Breeders' Cup Juvenile at Santa Anita but was never a factor after stumbling at the break.

Winner: Get Her Number

Get Her Number won on debut sprinting on grass this summer and came back to lose by just a length in the Del Mar Juvenile Turf when stretched to a mile by trainer Peter Miller. Switched to dirt here, the son of Dialed In settled in an outside stalking position after being quickest to the first turn, moved to the lead at the three-eights pole and fended off a game runner-up down the stretch to win by three-quarters of a length.

Runner-up Rombauer — who was also exiting the Del Mar Juvenile Turf —will push forward to the Juvenile off the promising first effort on dirt. Spielberg, a $1 million auction purchase for Bob Baffert, finished 5 1/2 lengths adrift to remain a maiden after three starts.