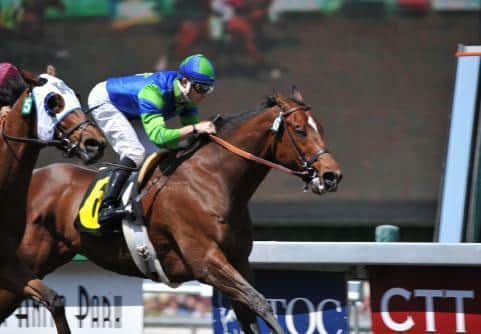 Performing like a gelding poised to defend his title in the $500,000 Hollywood Gold Cup on July 10, Rail Trip was an easy winner of the $150,000 Californian on Saturday at Hollywood Park.

Receiving the same pace pressing journey under Rafael Bejarano he had when capturing the $150,000 Mervyn LeRoy Handicap in his 2010 debut on May 8, Rail Trip took charge entering the stretch and was not challenged as the prohibitive 1-5 favorite.

Owned by Mace and Samantha Siegel’s Jay Em Ess Stable and trained by Ron Ellis, the 5-year-old son of Jump Start and the Carson City mare Sweet Trip made amends for a loss as the public choice in the 2009 Californian. A year ago, he was second behind Informed in the Grade II.

Becoming the first horse to win both the LeRoy and Californian in the same year since Even The Score in 2004, Rail Trip completed the 1 1/8 miles over Cushion Track in 1:48.49.

The 2 ¾ length victory was the eighth in 11 attempts for Rail Trip. He has won five of seven at Hollywood Park. The Kentucky bred has earned $967,790.

Sangaree, who was second in the LeRoy, completed the exacta again for trainer Bob Baffert as the 11-1 second choice. Slew’s Tiznow, the second longest shot in the field of eight at 40-1, was a half-length back in third. Spurrier, a 17-1 shot and the other Baffert entrant, finished fourth.

Cigar Man followed, then came One Track Mind, who set the pace, Tres Borrachos and Aitcho. In an oddity, all of the Californian participants are 5-year-olds.

“I had so much horse at the end,’’ said Bejarano, now 2-for-2 with Rail Trip. “It was nice to be able to save something for next time. He’s been training so good and he was really fit today. I felt a little pressure at the half-mile, but he kept on running. He’s getting better and better and you can do anything you want with him.’’

Much more mature in a variety of ways in his third season on the track, Rail Trip will seek in four weeks to become the third multiple winner of the Gold Cup. Fellow geldings Native Diver and Lava Man both won the track’s signature race three times.

“The nice thing about him is that he’s almost turned into a mile and a quarter horse,’’ said Ellis, who also won the 2007 Californian with Buzzards Bay. “He knows where the running starts and he’s really strong down the lane.

“As the year went on (2009) he got better and better with things. This year, he’s bigger, stronger and heavier. He’s matured a lot. He’s a real versatile horse and that’s going to come in handy at some point.

“When he won the Gold Cup, he was at the end of a lot of races. This year, by purpose, we wanted to bring him in and point for the Breeders’ Cup and have him ready for the second half of the year.’’

9-0 Baaeed is part of Breeders’ Cup qualifying races in U.K.
Want to watch elite racehorses in action this week...
x