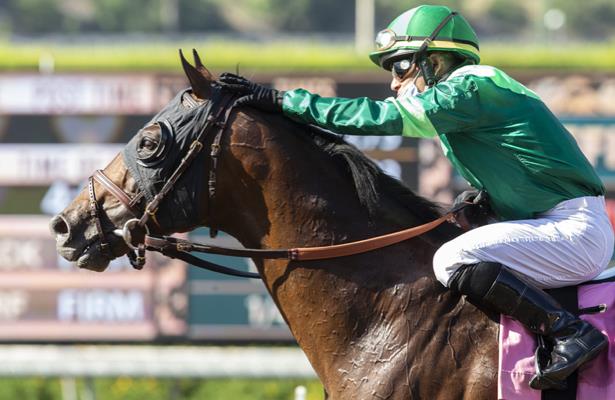 Raging Bull spent 2019 overshadowed, as with many of his Chad Brown stablemates, by the eventual Horse of the Year Bricks and Mortar, running against top competition but unable to beat it in five starts at turf racing’s highest levels.

Back Monday, the 5-year-old by Dark Angel ran like Brown’s next star, looping past his competition to win Santa Anita Park’s Grade 1, $300,000 Shoemaker Mile.

It was the first start since last September for the Peter Brant runner, who has done his best running on the west coast as a winner of the Hollywood Derby (G1) at Del Mar to close the 2018 season.

Under jockey Joel Rosario, Raging Bull flew late from off a sharp pace, with an unlucky Next Shares chasing 2 1/4 lengths behind as the winner hit the wire in 1:32.73.

"He broke well and they looked they were going in a good pace," Rosario said. "...He just came running like he always does."

At the start, the 2019 Preakness Stakes winner War of Will broke in, causing Next Shares to take up and out of the early proceedings. He almost made it all the way back, nipping race favorite Without Parole, Brown’s other entrant who ran third.

Stewards moved to disqualify War of Will from fifth to sixth in the order, one spot behind True Valour, with whom he also interfered when breaking.

“The plan was to be mid-pack with this horse, but we got wiped out at the start, so we were way back," said John Velazquez, who rode Next Shares. "He still ran a great race.”

A contentious battle up front, with Neptune's Storm pressing Voodoo Song, produced opening fractions of 22.16 and 44.75 seconds setting up Raging Bull's rally. The eventual winner had just two horses beat into the far turn before Rosario wound him up wide, circling the field with an extended rally.

"He ran a super race and he always runs good," said Juan Hernandez, assistant to Brown. "He had trained well here and he was acting good. He’s just a very special horse.”

Bred in France and purchased for a bargain $100,935, Raging Bull has made all 13 of his starts in the United States, improving on Memorial Day to 6-2-2.

With the victory, he earned a "Win and You're In" spot to the Nov. 7 Breeders' Cup Mile at Keeneland. The Shoemaker Mile marked the first Breeders' Cup Challenge Series race this season in the U.S.