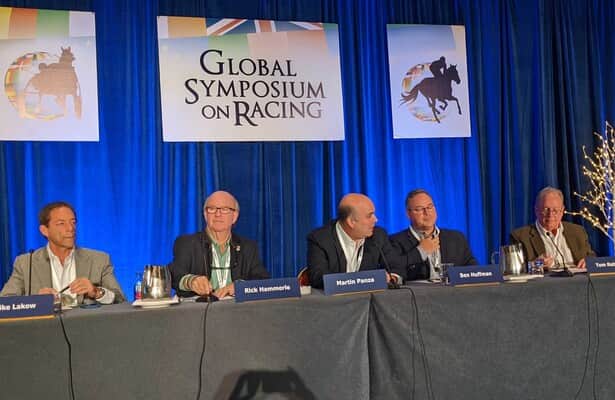 Dwindling foal crops. Too many choices of conditions. The distribution of purse money. They were grist for the mill of a panel discussion Wednesday morning at the 47th Global Symposium on Racing.

Some of the most respected racing secretaries in the country spent more than an hour talking about why field sizes have been shrinking. It was not until the final minutes that one of them even mentioned the stakeholders who probably are more interested in the topic than anyone else.

Up to that point, the conversation was all about why the average North American horse race had only 7.64 starters last year, down from a recent high of 9.03 in 1985, according to The Jockey Club.

Martin Panza, who recently left the New York Racing Association after eight years as senior vice president of racing operations, pointed to dramatic changes between 2017 and 2020 in the foal population.

Hammerle said that while the dwindling racehorse population was an important concern, he was more worried about the drop-off in how many times the average horse races in a given year.

“Foal crops are one thing,” he said. “But I’m more interested in the horses that are available to run exactly how many times they do run.”

Panza said the removal of Lasix from North American racing might help reverse that trend.

“In New York I had more than a few trainers come in – Bill Mott and Christophe Clément – and with the 2-year-olds not running on Lasix, they were coming back from races much quicker,” Panza said. “You look at the rest of the world not using Lasix, when you’re not dehydrating your horse and having them drop 40 pounds. I think there’s an advantage to that horse coming back out of his race maybe a little bit quicker."

[Related: Track executives talk the state of the industry]

Since racing secretaries cannot control the horse population, they can get creative with how they fill races. Hammerle even made a suggestion that, on first blush, sounded counterintuitive.

“I’m working at Oaklawn Park and Kentucky Downs,” he said. “They have one thing in common. They run on one surface. What that does is eliminate choices. The horses that come to Oaklawn Park, they’re not coming there to run on the turf. The horses that come to Kentucky Downs aren’t coming there to run on dirt. If we are able to eliminate choices the right way, constructively, it will increase field size.”

Mike Lakow is vice president of racing operations at Gulfstream Park, which just had a Tapeta track installed this fall between the turf and the dirt. He agreed with Hammerle when it came to limiting options, more so in condition books than with surface choices.

“We’re talking to the horsemen right now to eliminate (racing) categories,” Lakow said. “Rick mentioned too many options. The four of us went to dinner last night. The server came over and said, ‘What do you want for dessert?’ There were two options. It took about two seconds for her to get the orders.”

Ben Huffman, who writes the race cards at Churchill Downs and at Keeneland, concurred and got even more specific.

“I think we’ve got too many categories for dirt races,” he said. “Perhaps we should get rid of ‘non-winners of four for a tag.’ Or ‘non-winners of two races in six months to a year.’ I think those hurt our open races. It’s harder for those races to fill.”

“We just completed our 11th year of what we started way back when it seems like only yesterday,” Robbins said. “We didn’t know how it was going to go, initially. That concept has worked really well.”

Panza said the restructuring of purse distribution also helped in luring horsemen to take part in NYRA races they otherwise might have skipped.

“My fantasy about the game is what if we took a month off?” Hammerle said. “What if we didn’t race in the month of December, just picking that month? What if we gave everyone a break? The horses, a break. The fans, a break. Other sports take time off. It would just give everybody some time off to collectively save their horses. I think there would be a rush of enthusiasm instead of just the day-to-day glut of racing that we have. It doesn’t become exciting anymore.”

Near the end of the discussion, executive director Pat Cummings of the Thoroughbred Idea Foundation raised what he called “the dirty little secret” that flies in the face of bettors wanting more horses in the starting gate and, therefore, more value in the odds.

“Horsemen don’t want big fields,” Cummings said. “As an owner, I’d feel more confident in a field of seven as opposed to 12.”

“We encounter this every day,” Robbins said. “The trainers and owners prefer to run in five-horse fields. We get that. It’s up to us to educate them that, as much as they like a steady diet of five-horse fields, that’s a disaster in terms of the revenue produced for them in terms of purse money. A few of them are admitting that. They recognize the importance of full fields in terms of what it does to the product and their perception.”