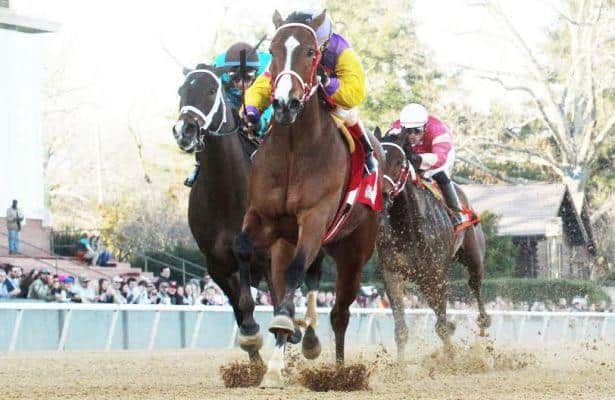 Val Yagos’ Racer pulled the upset over defending champion and 3-5 favorite Weast Hill using a front-running style in Saturday’s $100,000 Nodouble Breeders’ Stakes. After two straight third-place finishes behind the heavy favorite earlier this season, Racer was able to turn the tables and returned a generous payout of $17.20, $5 and $2.80 as the 7-1 third choice in the field.

Breaking from post position one under jockey Jon Court, Racer was the quickest away from the gate and never looked back. He took the field through early fractions of :21 1/5 and :45 2/5 for the first half mile and still had plenty left in reserve to hold off Weast Hill by lengths 1 ¼ lengths. He completed the six furlongs in 1:10 1/5 over a fast track.

“We didn't know if he’d make the lead, but we wanted to go out there and try to soften up Weast Hill,” winning trainer Tim Martin said. “This horse has really been training good. He broke like he’s been training in the mornings. He'll be galloping and just jump. He left running today.”