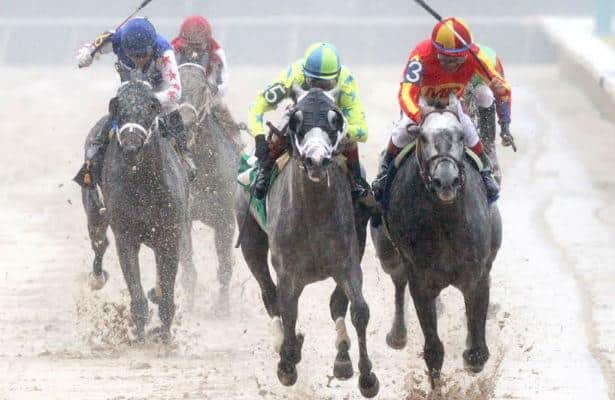 Trainer Todd Pletcher holds a strong hand for the $600,000 Oaklawn Handicap (G2) Saturday since he trains Race Day and multiple stakes winner Golden Lad, the top two wagering choices in the program. The 1 1/8-mile race for older horses goes as the seventh of 12 races on the track’s closing-day card. Probable post time for the 69th Oaklawn Handicap is 3:56 p.m. (Central).

Race Day, the 5-2 favorite against nine scheduled rivals, is biding for his second consecutive graded stakes victory in the Oaklawn Handicap. The lightly raced 4-year-old gray son of Tapit has won four of his last five starts, including the $250,000 Razorback Handicap (G3) March 14, the final major local prep for the Oaklawn Handicap. He returns from his south Florida base in hopes of giving Pletcher his second Oaklawn Handicap victory. Pletcher won the race in 2007 with champion older male Lawyer Ron.
Golden Lad, the early 7-2 second choice Saturday, won the 2014 Razorback, but hasn’t started since winning the $100,000 Essex Handicap Feb. 14 at Oaklawn. He finished fifth in the Oaklawn Handicap last year.
“They have both been training well and they are doing very well, and they both have wins over the track and have been successful there,” Pletcher said. “Everything is going according to plan.”
Race Day is scheduled to break from the rail under Hall of Fame jockey John Velazquez and carry 116 pounds. Golden Lad is scheduled to break from post 5 under Hall of Fame jockey Mike Smith and carry equal top weight of 117 pounds.
Multiple graded stakes winner Tapiture tries to rebound from a disappointing fifth in the Razorback, the 4-year-old debut for the son of Tapit. He was beaten 10 ¼ lengths by Race Day after being forwardly placed for the first half-mile.
“He needs to run faster,” trainer Steve Asmussen said of the early 9-2 third betting choice.

Also entered are Sammy Mandeville, Carve, Irish You Well, Hard Aces, Russellin, For Greater Glory and Street Strategy, although Irish You Well is expected to scratch in favor of a race at Keeneland.

Carve won the $100,000 Fifth Season Stakes Jan. 16, Oaklawn’s first major two-turn race for older horses, but finished a disappointing fourth in the Razorback. He has continued to train sharply for the Oaklawn Handicap. He finished third in last year’s race.