Quip 'stacks up well' for Dubai debut in the Firebreak Stakes 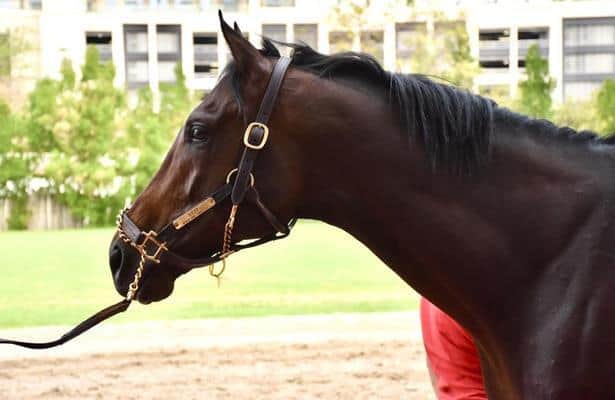 Thursday’s Group 3, $200,000 Firebreak Stakes at the Dubai World Cup Carnival will mark numerous firsts for multiple stakes-winning American import Quip. It will be his first start of 2020 and in the UAE, as well as for trainer Doug Watson and in the orange and black colors of Sheikh Rashid bin Humaid Al Nuaimi.

“Obviously, he has the form in the States, other than those last two starts when he went a little wrong,” Watson said. “He’s had a break and his work since coming back has been fantastic. I took him over to Meydan a couple times to breeze and he looks like he will run well fresh. He is pretty athletic and breaks well.

"I think everything is going for him. Whether he needs the run, I don’t know, but I think he stacks up well in this race. He came in pretty fit and it didn’t take him long to adjust. He looks great in his coat and there are a lot of positives about him, so we will just see how he goes."

A son of Distorted Humor, Quip won the Tampa Bay Derby (G2) when on the Kentucky Derby trail in 2018 and appeared in the Preakness Stakes. Back as an older horse, he won the Oaklawn Handicap (G2) at 1 1/8 miles and ran second in the Stephen Foster (G2) over the same distance before finishing unplaced in his following two starts, the TVG Pacific Classic (G1) Stakes (G1) and the Lukas Classic Stakes (G3).

A break necessitated and his purchase occurred in the interim, followed by a few weeks of light training at David Scanlon’s Florida farm. Quip arrived in Dubai in mid-December.

“If he runs a nice race, we’d like to go on to the Round 3 of the Maktoum Challenge after this,” Watson said. “North America and Benbatl might be in Saudi and I think he can stretch. He has won over (nine furlongs) in the States, so I think he can maybe do it. He can get into the Godolphin Mile with his rating, so there are options if it doesn’t work out.”

Stablemate Muntazah, last year’s winner of the Firebreak for HH Sheikh Hamdan bin Rashid Al Maktoum, appears the horse to beat in the race. The 7-year-old gelding has historically needed a prep race coming off his long summer break and now, with such under his belt when fourth by 9¼ lengths in the Al Maktoum Challenge Round 1 (G2) on Jan. 9, he should be a tough customer. Watson also will start Thegreatcollection, a reliable late-running sort who appears to be punching above his weight, but always comes out swinging late in the race.

“I’m really pleased with Muntazah, who always takes a run to get ready — just a big, massive animal who weighs at least 550kgs,” Watson said. “We knew he would need that and we did as much as we could, but he ran the same way he did in his first dirt start last year. He’s a good horse and one of the best we have when he’s right. The plan is going to be to run in the Godolphin Mile after this, if all goes well.

Watson also touched on multiple stakes winner Switzerland, who makes his Red Stables bow in the same silks as Quip in the 1200m dirt handicap on Thursday. The son of Speightstown was last seen failing to hit the board in the Dubai Golden Shaheen (G1) for trainer Steve Asmussen.

“He’s had two really good works over at Meydan and (jockey) Pat (Dobbs) is really positive about the horse,” Watson said. “He’s a big, heavy horse, but he’s had some good works and is as well as we could have him. He looks lighter to me than he did last year and we thought we would never get him to the races when we got him, but he’s flown along and is doing great. If he can run back close to his best, he will be right there.”